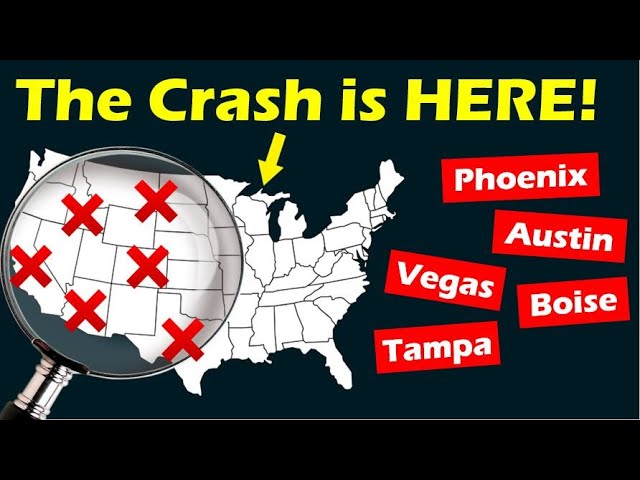 The US Housing Market looks like a massive Bubble. And if recent behavior by Zillow (selling homes at a loss) is any indication – that Bubble could be turning into a Housing Crash. Which Cities will experience the largest Housing Crash? And which cities will dodge it?

The first place to look is by understanding historical home price appreciation. Generally, markets with big, sudden surges in home values are more at risk for a future decline in values. While cities with lower levels of appreciation tend to have more stable Housing Markets across America.

Over the last 3 years metros like Boise, Austin, Spokane, Phoenix, and Tampa have had some of the biggest increases in home prices according to data from Zillow. Meanwhile, markets like Chicago, San Jose, New York, and Baltimore have had lower rates of appreciation.

Evidence from the 2008 Housing Crash suggest that the markets with higher short-term price growth could be at the biggest risk of a decline. While cities with lower price growth will support values better during a Market Crash.

Now – some might suggest that cities like Boise, Austin, and Phoenix deserve the high appreciation because they are high growth cities. The argument goes that the higher levels of migration and economic growth in these cities should push values higher.

The trouble is – these cities have always had high rates of growth. For instance, in Phoenix the levels of inward migration in 2020 were lower than they were in 2005 (Source: US Census Bureau). The same goes for Las Vegas, which has had significantly lower migration levels in recent years compared to the late 90s/early 00s. Housing Markets such as Spokane, Salt Lake City, Raleigh, and Orlando behave similarly.

So – if it isn’t migration fueling these higher prices – then what it is? My speculation is that these markets are in big, speculative Housing Bubbles. And that prices will crash down to the levels determined by local wages and incomes.

But you’ll have to make up your own mind. One great way to do this is by analyzing housing market data for your city/market, which you can do at Zillow. Link below:

DISCLAIMER: This video content is intended only for informational, educational, and entertainment purposes. Neither Reventure Consulting or Nicholas Gerli are registered financial advisors. Your use of Reventure Consulting’s YouTube channel and your reliance on any information on the channel is solely at your own risk. Moreover, the use of the Internet (including, but not limited to, YouTube, E-Mail, and Instagram) for communications with Reventure Consulting does not establish a formal business relationship.