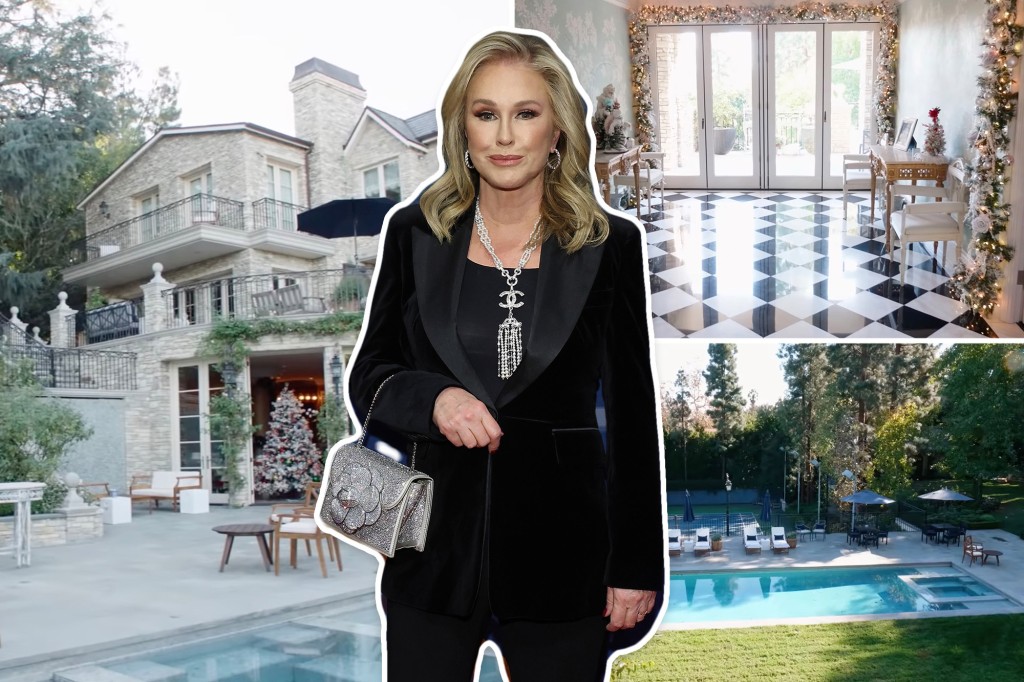 Kathy Hilton has become a quick fan favorite after appearing in the 11th season of “The Real Housewives of Beverly Hills,” giving viewers a rare glimpse into her personal life.

And now she is taking fans on a tour of her festive Bel Air home, decorated with all the holiday trimmings — and then some.

“I normally start decorating in October,” Hilton, 62, told Architectural Digest in an interview, “then keep adding until December.”

According to the famous mom of Paris, 40, and Nicky, 38, she thinks about the Christmas season all year long.

Her tchotchkes and trees stay up until February, with holiday classical music playing throughout the house since Thanksgiving.

Hilton explained how she usually hosts a glamorous Christmas party every year, but with her daughter Paris’ three-day wedding just last month, she skipped the big event this year.

“Three days does take a lot out of you,” said the mom of four. However, she promised that Christmas 2021 would remain classically Kathy Hilton.

“I do a really fabulous Christmas day brunch,” she explained, cooking “a frittata with really nice vegetables, and sour cream and caviar, and these little cinnamon rolls, bacon, and pancakes with melted butter and really good syrup.”

The spirit of the season begins on the outside of the home, which spans nearly 15,000 square feet. Instead of lights, she decorates the entryway with garlands of fresh apples, oranges and grapes.

As far as perking up the centerpiece of many holiday-decorated homes, Hilton confessed that she is not particularly skilled at putting lights on a Christmas tree — so please don’t ask her to do so.

“Lighting is everything. I don’t like it when it’s just thrown on — I’m a nut in having it tucked back in here,” she proclaimed as she pressed lights toward the trunk of an indoor Christmas tree. “So I always get a pre-lit tree. I think that it’s just easier.

“But you can never do enough fluffing,” she said while still obsessing over ornament and light placement. “I always say I’m a fluffer.”

The house is filled with artificial trees throughout.

“I have one in the library, one in the living room. One in the sunroom and one in the entry. Boy, I could have a sale here,” she said. There’s also a tree that Hilton leaves bare until Christmas so that the family can trim it together.

“Usually I do not let the family touch anything. I’m a control freak when it comes to the ornaments. My husband likes to hang some of them, and I’m, like, ‘No, no, no, Rick, no.’”

Each room of the home — which includes seven bedrooms and eight bathrooms, multiple sitting rooms and a butlers pantry — is designed with its own flavor.

“My blue-and-white room reminds me of Southampton, New York,” explained Hilton, a New York native. “My library reminds me of New York City, in a townhouse or an apartment, with the dark wood … Then, if you’re standing in the living room, it’s all butter yellow, pale blue, creams, with a little bit of apricot or maybe shrimp or blush.”

In the wood room, where Hilton and her 52-year-old sister Kyle Richards famously ate off TV trays on “RHOBH,” the decorations included hundreds of Santa figurines.

Meanwhile, the entryway has evolved over the years.

“I used to do it all in pretty pale aqua and silver and gold, and then I started thinking, I don’t want to just match and have it look like a hotel lobby. So the last few years I’ve been doing what you see”— red, gold, white and tinsel galore — “and next year it’ll be a whole new thing,” she said.

The Hiltons purchased the home from “Charlie’s Angels” star Jaclyn Smith in 1993.

Beyoncé, a $100k-a-night suite and a red carpet of influencers: Dubai basks in its booming economy
Construction halts at Times Square Theater as building remains tenant-less
These common misconceptions can prevent you from achieving that perfect credit score
‘Full House’ creator’s Manson murder mansion gets $25M price cut
What is a ‘rolling recession’ and how does it affect consumers? Economic experts explain