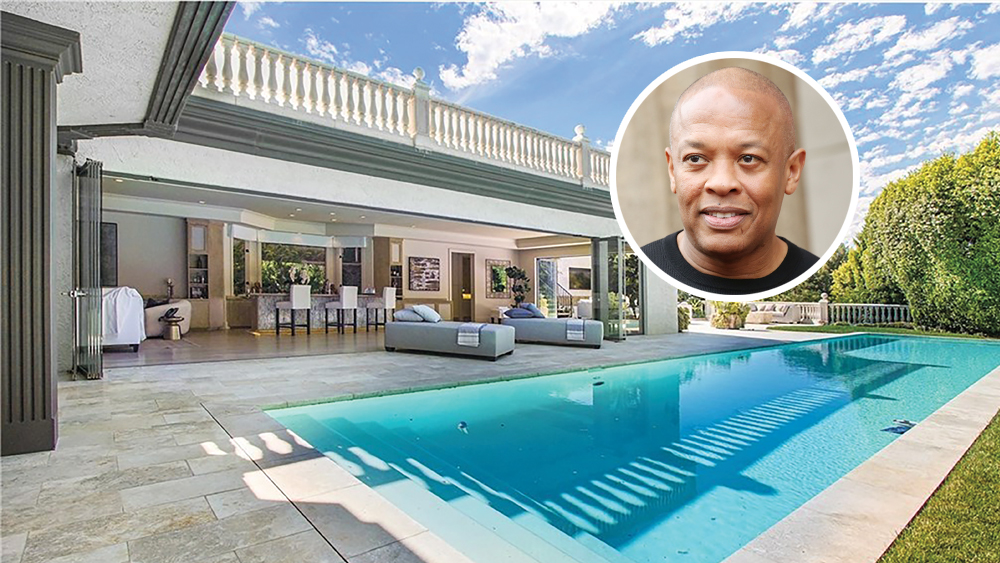 A lavish mansion in a quietly ritzy, guard-gated enclave discreetly nestled into the rugged foothills above L.A.’s Woodland Hills, long owned by Andre Young, aka rapper, record producer and near-billionaire entrepreneur Dr. Dre, has come for sale at $5.25 million. Dre himself, worth about $800 million, according to Forbes, hopes to more than double his money on the suburban spread he picked up more than 20 years ago for a tad less than $2.4 million.

Behind gates on a bit more than half an acre, and listed with David Smith at Keller Williams Realty Calabasas, the more than 16,000-square-foot ersatz French manor house has a total of eight en suite bedrooms and 13 bathrooms over three, elevator-serviced floors. Large enough to accommodate a baby grand piano, the sprawling master suite incorporates dual bathrooms plus a hair-and-makeup salon/dressing room, and attached guesthouse includes a kitchenette.

Grand-scale entertaining spaces include a foyer the size of a shopping-mall atrium, opulently garnished formal living and dining rooms and a dark-paneled office/library under a deep-coffered ceiling. An eat-in family kitchen is complemented by a separate chef’s kitchen; the family/game room features a 150-gallon fish tank; and there’s a plush screening room, kitchenette and workout room tucked up into the third floor. Back on the main level, a lengthy wall of windows in what listing descriptions refer to as a Grand Lanai slides open to a lushly planted backyard that offers an “Olympic length saltwater pool” and a stone-paved patio anchored by a TV-surmounted outdoor fireplace.

Dre substantially upgraded his residential circumstances in Los Angeles in 2014 with the $40 million purchase of a Brentwood-area mansion he scooped up from New England Patriots quarterback Tom Brady and his wife, Brazilian catwalker Gisele Bündchen. He additionally owns a handful of other homes in Los Angeles that include: an oceanfront mansion in Malibu bought almost 20 years ago for close to $5 million; a roughly 9,400-square-foot mansion in Calabasas picked up just over a year ago for $4.9 million; and a three-bedroom ocean-view villa on a gated Pacific Palisades street snatched up just a few months ago for $2.25 million.