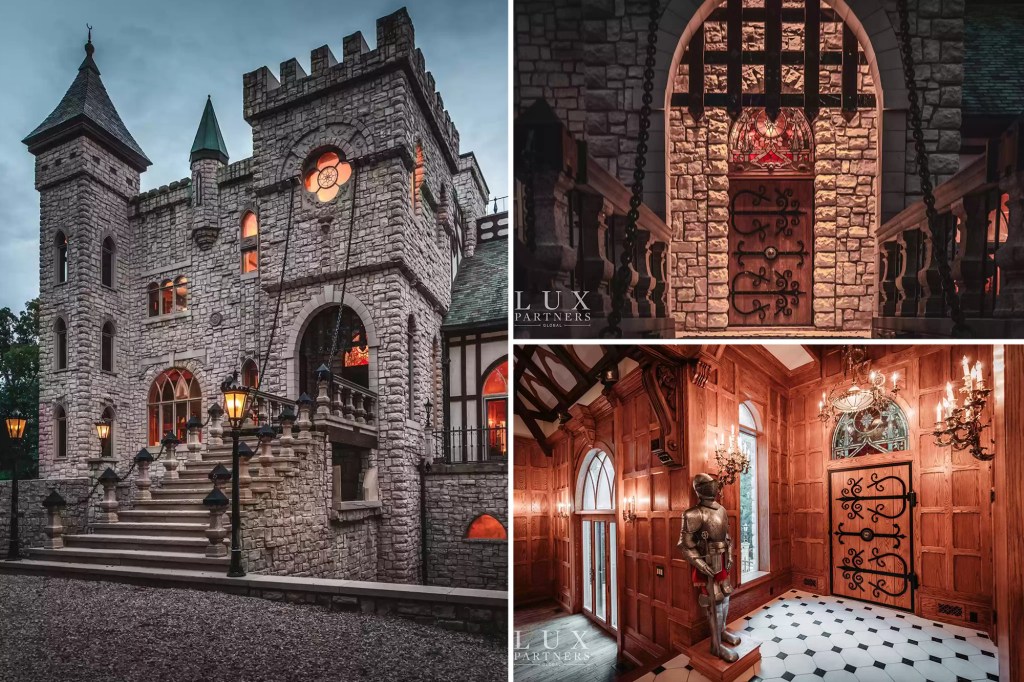 Where’s Shrek when you need him?

A Medieval-inspired castle comprised of its very own trap doors, a hidden underground grotto with a jacuzzi and a dungeon could be yours for $2.3 million.

To enter the castle, you would need to pass two gates, two watchtowers, a moat, a drawbridge and an actual portcullis.

The residence fit for a king was built not in Medieval times, but in 1990 — in Detroit.

A local businessman began construction on the castle for himself and his two children in the mid-1980s. Although he sold it in 2015, he would live in the castle until 2019.

“It was a give and take between what really could happen—and a dream for a homeowner where money was no object. He wanted to have a home that was something he dreamed about as a kid,” listing agent, Michael Kuligowski told Realtor.com. “To live in the house would be like living in a kind of childhood dream for someone who grew up idolizing the Knights of the Round Table and living in the Renaissance era.”

“The trap doors, hidden passageways and hallways are just fun and unique. They wow your friends and your family,” Kuligowski adds. “Pushing a bookcase and then realizing it it leads to a room. When it’s closed, you’d never know there was a room behind it.”

“Even the door hinges are very Victorian-style and there are details around the home that are undoubtedly castle-like and timeless,” he said. “It was custom-designed to be a 15th-century-style English castle.”

Made up of five bedrooms and seven bathrooms, the castle is situated on over 6 acres land.

But it’s going to take a someone looking for a little adventure to want this place. First listed in September, the property has yet to find a buyer.

“The frame is built with 60 tons of steel and construction took over 6 years utilizing artisans from all over the world. The castle is 60 feet tall, or taller than a 4 story building,” the listing states.

What’s more, the primary suite features a custom-made bed that was assembled in the room itself and therefore impossible to remove.

The full bar comes with 12-foot ceiling and unique details in the walls.

“They plastered over [a stone wall] and then put some straw in it in the same style they would have done 500 years ago, when they would essentially do mud walls with straw as a bonding agent,” Kuligowski said.

The castle is the largest home in the upscale gated community.

“This is the biggest lot, but also the first lot that was developed, so it’s in the very back of a neighborhood,” he explained. “There are homes with different architectural styles but mostly Colonials.”

“Someone that grew up loving fairy-tales or stories would really fit this house,” he added.

Zillow: Shocking Housing Market Flip Flop AGAIN!
Todd and Julie Chrisley will have to give up $9M mansions to pay $17.2M fine
Why Value-Add Real Estate Beats Every Other Investing Strategy
Wait, is China about to go to war with Taiwan? Are they crazy | Redacted with Clayton Morris
Is Buying Land A Good Investment Right Now?