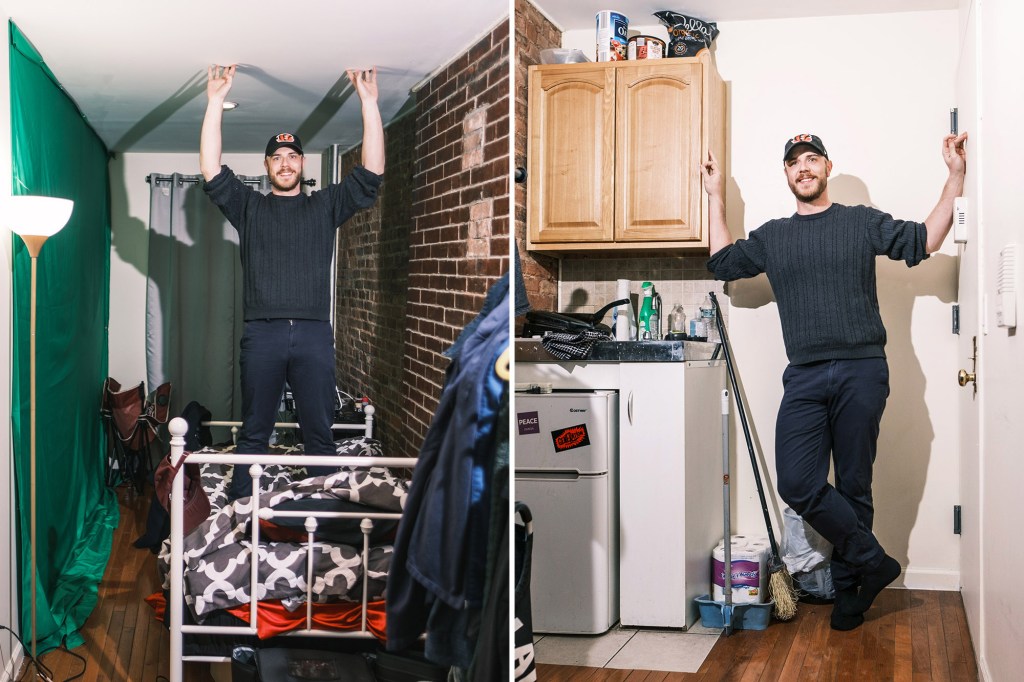 Size matters — in this battle of the Big Apple’s tiniest pads.

A comedian living in West Harlem says that his wee-sized space beats an apartment that went viral on TikTok for being the city’s “smallest.”

“When I bring guests over, we pretty much just hang out in the backyard,” said Ron Ervin. “We come inside for a minute to look at my tiny apartment, say, ‘Oh, that’s funny,’ then we head back outside.”

Ervin gave The Post a very brief tour Saturday to take aim at AJ Webber, a model and aspiring actor who claimed in December on TikTok that his East Village apartment was the least spacious in the city.

Originally from Cincinnati, the 6-foot-2 Ervin said he moved to New York from Chicago last February and found his apartment on Craigslist for $950 a month.

Though his apartment is 100 square feet — the same as Webber’s — he argued that his space is tighter.

For example, Webber has a closet and minimal storage space, Ervin just uses a rolling clothes rack to keep his shirts and pants organized.

“You have an actual closet to put your clothes in. OK, Bill Gates,” Ervin says to Webber. “Let’s sit in your BMW and talk about it sometime.”

Webber revealed in his home tour last month that when he opens the door to his $1,200-a-month apartment, he’s greeted by a bathroom sink to his left and no toilet or shower in sight.

As with Webber’s apartment, Ervin shares a toilet in the shower in the building’s hallway with his neighbors.

Both men’s apartments come with challenges for meal preparation. Webber has a microwave on top of a fridge, and neither of them has a stove.

“I have a little countertop next to the sink on which I placed a $10 hotplate and a George Foreman grill I found in the hallway,” Ervin noted.

Having less room has its advantages — less things to clean.

“To be completely honest, it does work for me,” Ervin said.

“This gives me a place to lay my head, make food and be on the computer,” he said.

Most Important Personal Finance Principle
QUICK SNEAK PEAK 👀 REAL ESTATE FRANCHISE
Elon is about to drop a BOMBSHELL on the Hunter Biden laptop story | Redacted with Clayton Morris
How to get into Real Estate: investing strategies 101
The easiest way to travel full time? See what a 28-year-old paid for an apartment on a cruise ship