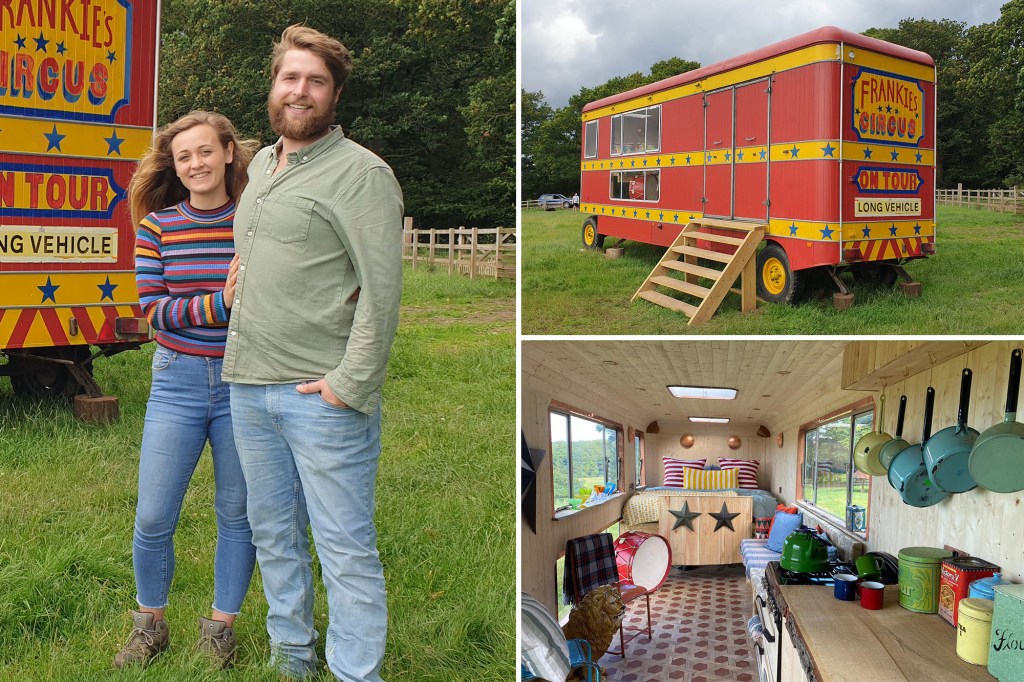 These lovers are perpetually running away to the circus thanks to their home being a converted carnival wagon.

Frankie Lord and Olivia Dann were living in a log cabin on Lord’s family’s Buckinghamshire farm when his father bought an old buggy for some $2,700.

The wagon, which once belonged to the still-operational UK company Jolly Circus, inspired the couple, who got to work converting it into a new non-traditional home for themselves.

The home renovation show “George Clarke’s Amazing Spaces” featured the project on one of this season’s episodes.

“I started the build at the beginning of March last year,” Lord, who is a farmer-turned-carpenter, told Buckinghamshire Live in a January interview. “I turned on the radio one morning and heard George Clarke stating that he was on the hunt for contestants for the newest series of ‘Amazing Spaces.’ I decided to send in an email… and then got a phone call later that day saying they were really interested. They came up quite soon after and followed me for about four or five months.”

While he and Dann did the vast majority of the work, the show’s host did influence some aspects of their process.

“The toilet, the golden throne, was actually George Clarke’s idea. He had a look around our workshop and saw this old chair that wasn’t being used and was really excited to have that be the toilet, so we thought we’d better do that,” Lord said of the royalty-worthy antique toilet in the wagon’s new bathroom, which  also features an antique-looking bowl and custom shower setup.

The wagon also now features a kitchen, parquet floors and a large bed with circus-themed pillows.

The outside, meanwhile, is “all original paint” and the original windows were also left untouched.

In total, Lord estimated the renovation process cost the duo, both 28, somewhere in the range of $6,700 to $9,400. The experience was so enjoyable he’s already working on converting more unique spaces into houses.

“We realized we both actually really enjoyed the build and have decided to carry on working together,” said Lord of Dann and his friend Philip Reed, who also helped with the renovation. He’s since acquired a ripe-for-conversion London Underground carriage from 1949.

Buyer Cancellation Rates Surge for New Homes
The future of parking is in New York — and it costs at least $300,000 per space
FLORIDA Housing Market: Home Prices Drop to a 7 Month Low
The Fed: “Abnormal Unsustainable Behavior” in the US Housing Market
How mortgage rates affect housing market as Federal Reserve weighs new interest rate hike