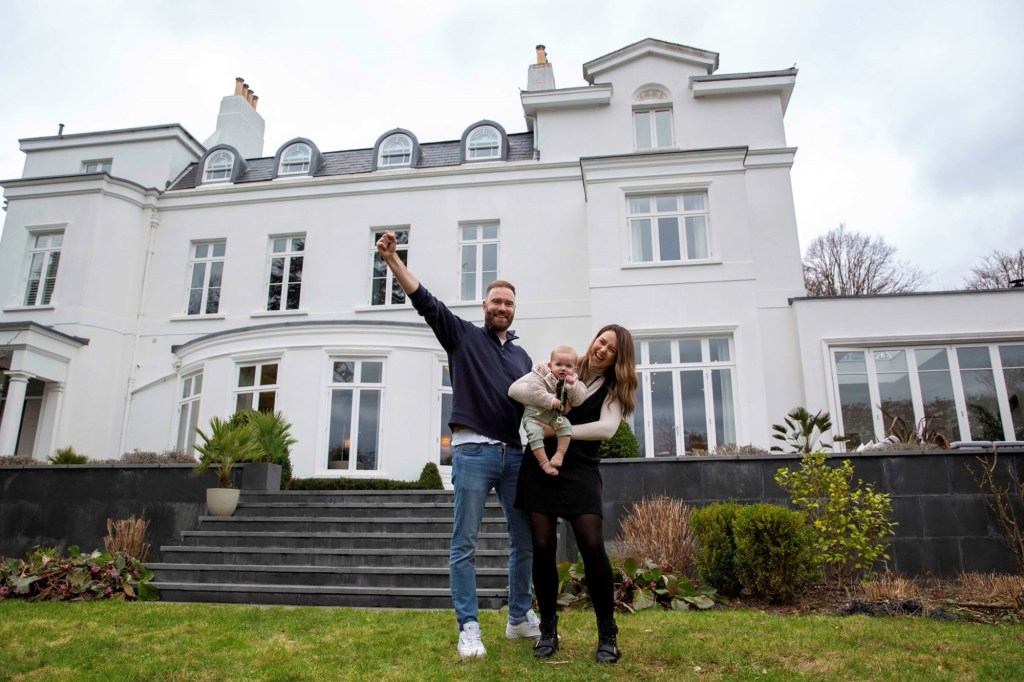 A new mom’s life has changed dramatically overnight, in the best way possible.

UK resident Becca Pott recently won an extravagant $4.75 million house — and she, her husband and their newborn baby are moving from their cramped two-bedroom East London flat to the sprawling five-bedroom, four-bathroom mansion.

Pott, 32, who hails from southeast England, entered the Omaze Million Pound House Draw and was the lucky winner with a ticket that cost just $13.

But the family nearly missed out on the big prize.

“My husband [Ben] had entered every Omaze Million Pound House Draw prior to this one, but somehow he’d forgotten to enter on this occasion. But luckily I decided to buy a £10 ticket bundle in January without him knowing after seeing the house on television,” Becca told Jam Press. “I’m never going to let him live this down!”

Located on Queen’s Hill in Berkshire’s upscale Ascot neighborhood, the property is just one-third of a mile from Ascot High Street and the world-famous Ascot Racecourse.

Before the couple’s lucky win, Becca had been on maternity leave from her job as a financial analyst after giving birth to their 8-month-old daughter, Ava, last summer. Her husband, also 32, is an accountant.

“The house is incredible. We’ve been wanting to move to somewhere bigger since our daughter Ava was born, now she’ll be having her first birthday in a mansion,” Becca said. “We didn’t have space for her grandparents to come and stay in our two-bedroom flat, but now they can have the entire third floor when they visit.”

And if you think it’s too good to be true, it’s not.

The prize comes with all property taxes and legal fees covered, as well as $27,100 in cash to help them settle in.

Becca and Ben are also free to do with the home as they choose — whether they live in the house themselves, rent it out or sell it.

“This win is truly life-changing for us,” she said. “We’ll stay here and enjoy the house for the summer at least, but whatever we decide to do, we know Ava is set for life.”

The campaign has a bigger purpose too. It brought in funds for Cancer Research UK, netting the charity donations of nearly $680,000 to help fund projects including TRACERX, the largest genetic study to see how lung cancer evolves and why treatments stop working, reported Jam Press.

The lottery is backed by the charity’s long-standing ambassador, Ronan Keating.

“So many of us, myself included, have been affected by cancer,” Keating told Jam Press.

“I’ve been a proud supporter of Cancer Research UK for many years and have seen first-hand the difference research makes to those affected by cancer.”

This was the sixth Omaze Million Pound House Draw in the UK and brings the total raised for good causes to nearly $5.1 million.

The seventh house draw is expected to be a six-bedroom, $4.068 million house in one of England’s vacation spots, the Lake District, to raise funds for Alzheimer’s Research UK, with the lottery closing on March 27.

Debt Strategies For Real Estate Investors
The future of parking is in New York — and it costs at least $300,000 per space
Flipping houses! Check this deal out! #shorts #youtubeshorts #flippinghouses
FLORIDA Housing Market: Home Prices Drop to a 7 Month Low
The Fed: “Abnormal Unsustainable Behavior” in the US Housing Market