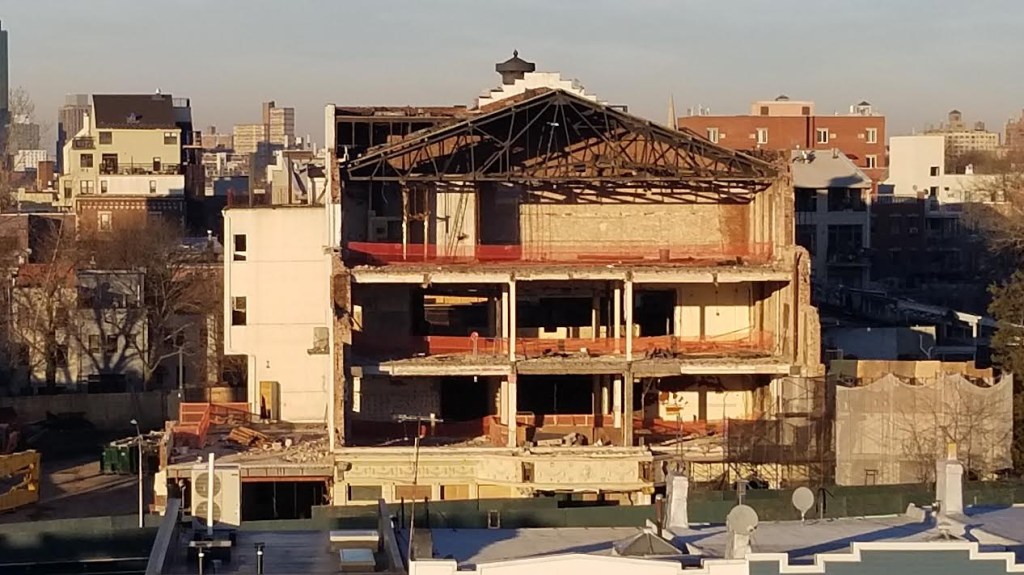 The face of Brooklyn’s beloved Grand Prospect Hall is no more.

Locals observed that the exterior of the iconic wedding venue were ripped off this week, exposing the interior of the building in an almost dollhouse-like manor.

Area resident, artist and building advocate Jim Glaser observed Monday that the 119-year-old face of the structure had been torn off. The Victorian-era building sold for $22.5 million last July following the May 2020 death of its longtime owner, Michael Halkias, who co-starred in the “SNL”-spoofed TV commercial in which he and wife Alice stood on the building’s center staircase and declared, “We make your dreams come true!”

For 35 years, the Halkias family hosted events at the building, which is set for demolition, to be replaced with high-end housing.

“It’s sad to see the building in such a state,” Brooklynite and longtime building fan James Marlow told The Post of the Grand Prospect Hall’s current appearance. “Sure, it was admittedly fading, but it added such character to what is otherwise a dreary strip overlooking the Prospect Expressway.”

The fact that it is set to become a residential development and not some other form of community-based space, he added, is deeply disappointing.

“I’m sure an adaptive reuse option would have been viable,” said the native New Yorker.

In photos Marlow shared with The Post of the building during sunset in May 2020 — days after Halkias’ death — its fully intact façade glows golden in the fading light. In contrast, Glaser’s photos show that, during sunset, the building is now gutted and full of internal shadows and some structural beams.

“The sun sets on South Park Slope and so much Brooklyn history,” reflected Glaser of the building’s freshly removed face. “Grand Prospect Hall’s 130-year legacy sadly ends as tons of rubble get carted away.”