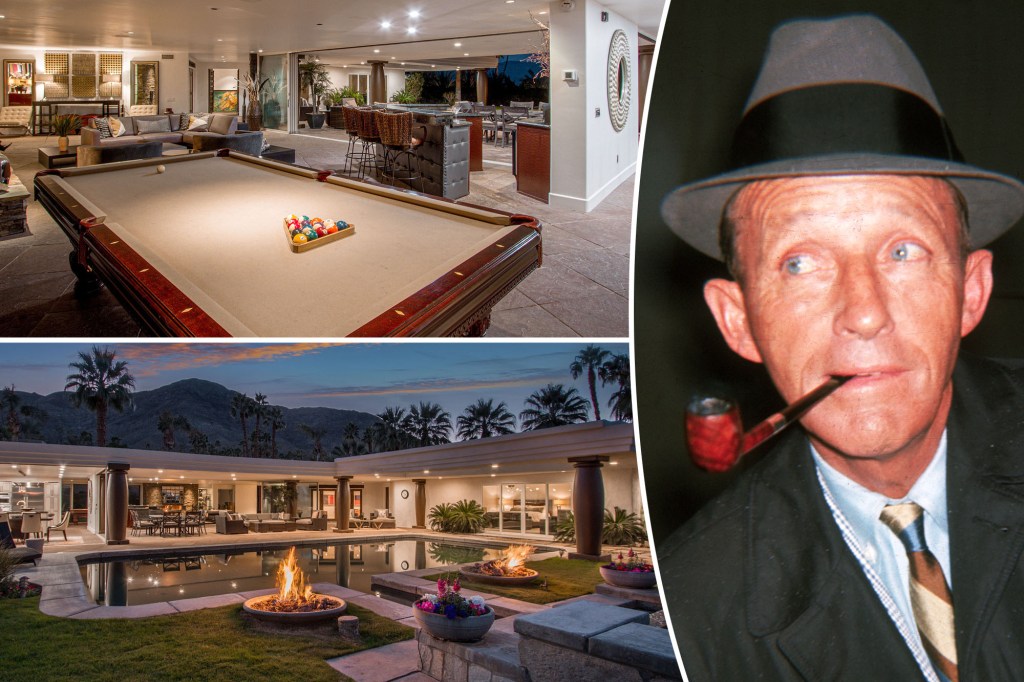 Here’s something to croon about.

After more than 10 years on and off the market, Bing Crosby’s midcentury-modern estate he built in the 1950s has finally sold for $4.15 million.

Orange County businessman Bob Teller and his wife Rita had initially purchased the Rancho Mirage home back in 2005 for $2.62 million. They first listed the property five years later, in 2010, for $3.5 million.

But over a decade later, gliding on and off the market, Wayne Butler & Garret Gray, the tech entrepreneur who recently sold his company Next Gear to Core Logic are the buyers.

Situated on roughly 1.5 acres in the gated community of Thunderbird Heights, the 6,700 square-foot home features six bedrooms and six bathrooms.

Amenities include an outdoor kitchen and patio which boast Coachella Valley views, a pool and spa, putting green and an entire guest wing with two bedrooms and two bathrooms, the listing states.

The home has Hollywood connections in addition to the “White Christmas” crooner. The attached two-bedroom casita with its own kitchen and separate entrance is rumored to have been visited by John F. Kennedy and Marilyn Monroe. True or not, the legend inspired the guest wing to be renamed the JFK wing.

It is considered the largest sale in the neighborhood with Barack and Michelle Obama purchasing a home in the upscale private community nearby.

“Own a piece of history,” the listing stated, describing the space as a “seamless indoor/outdoor flow,” featuring panoramic mountain views and “sweeping down valley vistas.”

The area has also been visited by celebrities and US presidents alike, including Richard Nixon, Ronald Reagan and Gerald Ford, who vacationed there.

The primary suite spans 1,400 square feet and holds a fireplace, indoor and outdoor showers, a separate tub, and a large walk-in closet.

The neighborhood has 24-hour manned security, the listing adds.

Crosby died in 1977. The actor and singer’s biggest hit was “White Christmas,” written by Irving Berlin. The holiday tune hit No. 1 on the charts and has sold over 100 million copies worldwide.

2022 Bigger Better More. A Bigger way of Flipping Property in South Africa.
This is happening in Afghanistan and we should all pay attention. | Redacted
What Is Going To Happen In Real Estate Business Of Pakistan? Effect Of Tax On Real Estate Business?
NYC office leasing deals are heating up as landlords consider fresh uses
Zosia Mamet sells $1.2M NYC spread at a loss