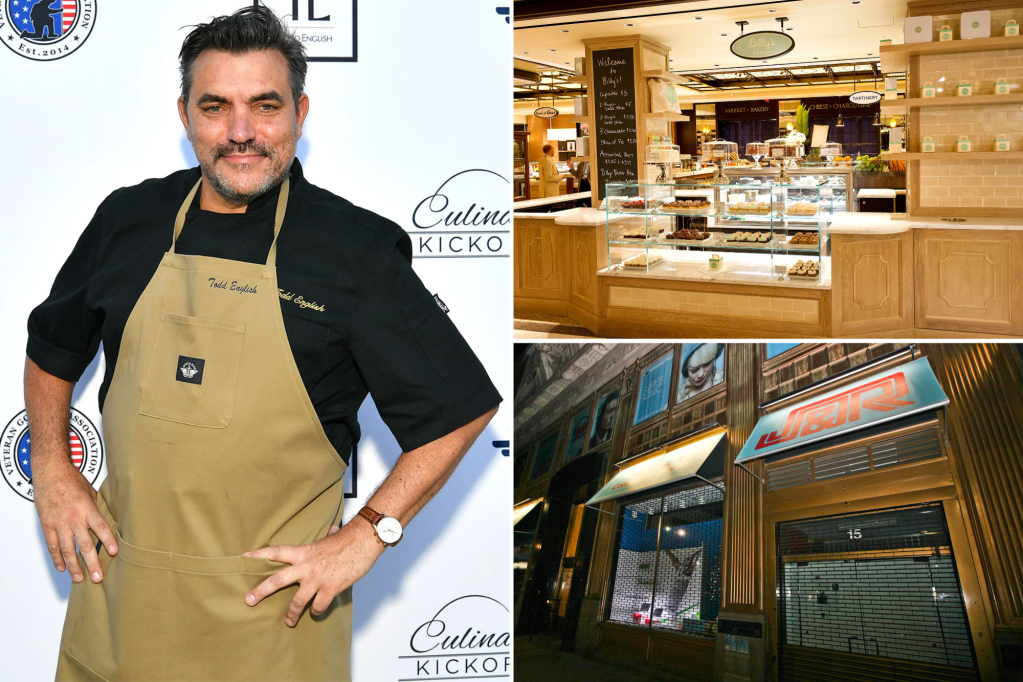 A huge eatery under the English banner has signed a lease for 20,000 square feet on two levels at 15 Park Row across from City Hall Park, downtown sources revealed. The site is at the block’s south end, which has been vacant since J&R Music World shut down in 2013.

The surprise deal leaves some unanswered questions, including exactly who the actual operators will be, but they’re believed to be an investor group that is backing English.

Although he’s been quiet in New York recently, English – who created the Plaza Hotel food hall — just launched a hotel in Las Vegas and food courts in cities including Stamford, Conn., and restaurants in West Palm Beach and Washington, DC.

No other details about the FiDi site could be learned. A canvas of brokerage web pages turned up an offering for the 15 Park Row space by a Meridian Retail Leasing team of James Famularo, Ben Biberaj and Elliott Wygoda.

The listing did not cite an asking rent, but our on-the-ground neighborhood source said it was $2.5 million a year.

The English lease is the latest breakthrough on the rebounding FiDi-area food scene.

In addition, Danny Meyer is expected to soon reopen Manhatta on the top floor of  28 Liberty St.

Supertall full-speed ahead on Fifth Ave.

Gary Barnett is pressing ahead with plans for his supertall office tower at 570 Fifth Ave. His Extell Development Co. is proceeding with demolition at several old buildings at the site between West 46th and 47th Streets, ever-alert YIMBY New York reports.

As we earlier reported, Extell’s proposal is wending its way through the city ULURP review process because it needs a zoning change to erect a structure of up to 1,100 feet tall.

To earn the size bonus, Extell would provide transit and pedestrian improvements including a much needed upgrade to the nearby East 53rd Street E and M line subway station. Such exchanges are authorized under recent East Midtown rezoning, which enabled SL Green to erect One Vanderbilt in exchange for $200 million in Grand Central-area improvements.

Barnett must also deal with having to build around the 12-story building at 576 Fifth Ave. at the 47th Street corner, which was  purchased by a South Korean apparel-industry holding company last year.

The Lower Manhattan office-leasing scene remains “a tale of two cities,” according to CBRE downtown specialist Bruce Surry. Newly constructed towers are holding their own while obsolescent older ones are  struggling to stay afloat.

It’s no secret that the  pandemic disproportionately damaged downtown’s office market. Office vacancy in February swelled to 22.6% compared to 18.6% in Midtown – despite downtown average asking rents of $59 per square foot vs. nearly $85 per square foot in Midtown, according to CBRE data.

So much empty space combined with employees still working at home casts a pall at street level.

The gloom extends the length of Fulton Street, for example, where store and restaurant closures abound and homeless people camp out on sidewalks.

“The newer and upgraded properties have seen increases in leasing and [prospective tenant] tours,” he said. “The remaining Conde Nast sublease space at One World Trade is very active with four full-floor deals” under negotiation.

But, “Older class-B and class-C properties are fighting for renewals. Demand is very low,” Surry said.

Moreover, he said, “There’s been a tremendous supply increase of direct and sublease space in the Water Street area.”