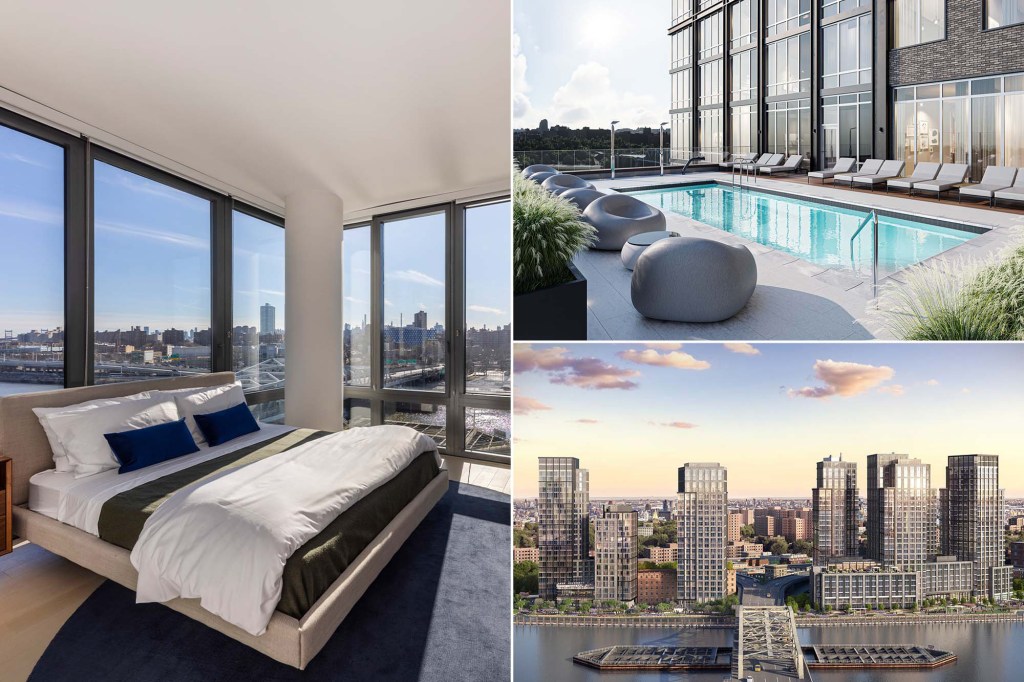 The Bronx isn’t burning but it is on fire with new luxury buildings boasting sky-high Manhattan-like rents — some over $7,000 per month.

The borough’s newest building, Third at Bankside, has several two- and three-bedroom market-rate apartments that can set you back over $5,000.

There’s even a stunning spread with two baths and a huge private terrace available for $7,334 for a one-year lease or $7,434 for 18 months — and already has at least one applicant craving the rooms with lots of views.

The 25-story building is being developed in Mott Haven by Brookfield as part of its seven-tower Bankside project that sits along the shoreline of the Harlem River and straddles the Third Avenue bridge to Manhattan.

There are other perks as well: All new renters get two months of free rent and free access to amenities that include a “creative makerspace,” resident lounges, a kid’s playroom, test kitchen and outdoor BBQ area plus a fully loaded gym that also overlooks the river — all of which normally costs $125 per month.

To support the under market prices, the other residents are paying up.

Some two-bedrooms have two bathrooms plus a den that could easily serve as an office or third bedroom and start at $5,029 for an 18-month lease. While that’s pretty penny for the historically price-competative Bronx, try finding that much space in the city at that price point.

There’s also a three-bedroom with two-baths on the eighth floor that faces away from the river and a relative bargain at $5,025 for 18 months. The leasing website offers multiple options to check out all the floor plans and flexible terms.

“There is a lot of interest for the large apartments,” said Charles Howe, vice president, development, Brookfield Properties. Some couples are leasing two-bedrooms and using the extra space for the now pandemic-necessary home office or future nursery, he said, while singles want to share them with a roommate — especially those with two bathrooms.

Seven of the units have private terraces and include a dramatic 23rd-floor, one-bedroom, one-bath apartment facing away from the river that rents for a whopping $5,126 on an 18-month lease while its neighboring studio commands $4,382 for a 17-month lease but leaps to $5,077 for 18 months.

For someone with deep pockets or a sugar daddy, that priciest three-bedroom, two-bathroom pad on the 18th floor of the project’s first 25-story building is hard to resist.

Its huge, sundrenched outdoor terrace has sweeping views across the city from Long Island City to the toothpick towers of Billionaire’s Row and even the top of the George Washington Bridge.

Another private terrace also wraps around a two-bedroom, two-bath unit on the ninth floor that has an 18-month rent of $6,160 per month while its neighboring two-bedroom has a very long terrace for a mere $5,408 for 18 months.

Sitting on sheltered paved courtyards next to the Third Ave. Bridge, the entire project is just a seven-minute walk to Manhattan’s 125th Street 4,5 and 6 trains or the 6 train at E. 138th Street in the Bronx.

According to Brookfield executives, the mostly open plan apartments also have slightly more elbow room than comparable new rentals such as their own along the Brooklyn waterfront, while the oversized windows — some are floor to ceiling and even wrap some corners — make the units feel even bigger.

Every apartment in the LEED silver building designed by Hill West Architects also comes with built-in window shades and deep closets. Some have entry alcoves and walk-in closets, giving them a roomier feel.

Blomberg appliances include a stacked washer/dryer (often in its own closet), a dishwasher and microwave, while the stoves have gas burners for cooking — and are among the last apartments allowed to hook up under the city’s new anti-gas rules.

Counters are dark grey Caesarstone with grey cabinetry accented by light wood or open shelves along with stainless sinks and refrigerators. Bathrooms have either no-lip stone and tiled showers or a bathtub — and all have deep, light wood drawers and black Caesarstone counters.

The pet-friendly building allows multi-pets and large dogs and even has a dog-washing station for when it snows or that walk on the new esplanade turns into a swim in the river.

When it opens later this year, the outdoor pool will have a separate membership fee and an indoor pool will be located in another Bankside tower.