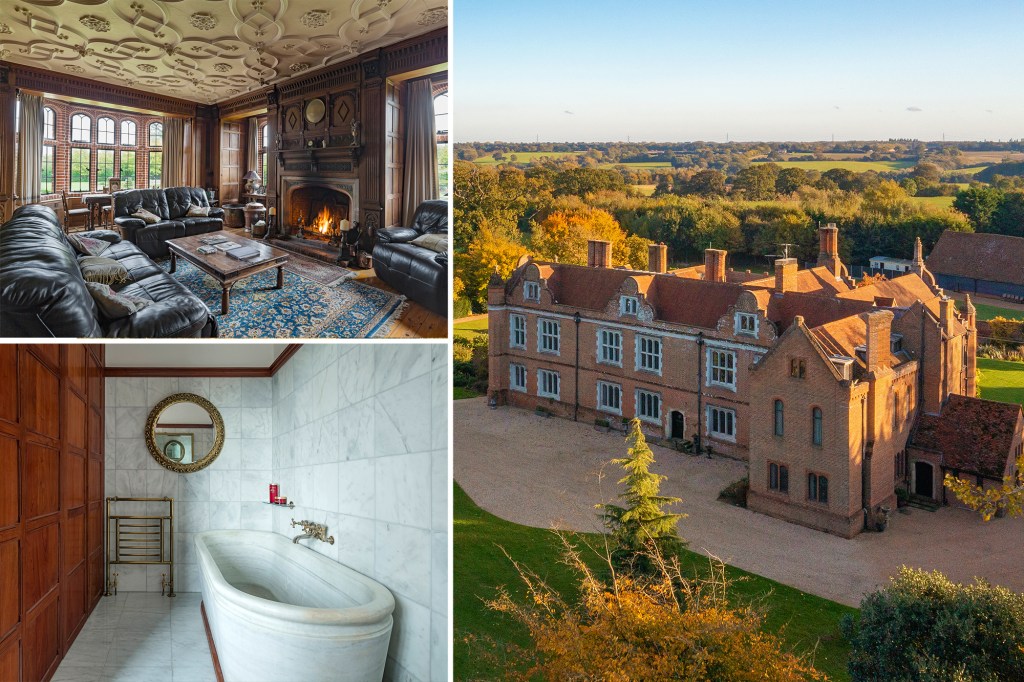 Plenty of houses have water features intended for friends, but few have ones built for enemies.

This English Tudor boasts not only a pool and pool house but also a moat leftover from its days as the 14th-century home of Robert Bouchier, successor of Lord High Chancellor John Bouchier.

The history of the estate, currently listed with Savills for $8.5 million, predates even Bouchier, who in 1341 obtained a license to make the Pebmarsh, Essex property a castle and subsequently commissioned the construction of a moat.

First evidence of a structure on the land dates back to the 11th century, during the reign of one of the last Anglo-Saxon kings, Edward the Confessor, who lived in a manor at the address. Stanstead Hall, as it is named, was then passed on to various royals and nobles, by marriage, seizure, annexation and more traditional purchase methods.

Today, it offers not only the dramatic remains of its ridiculously British sales history in the form of the moat and the remains of a 16th-century buttressed chapel, but also all the conveniences of a more typical luxury country house.

“They’re not something that requires a lot of maintenance,” Savills agent Tim Phillips told The Post of owning a moat and the remains of an ancient chapel, both of which are historically designated. “We often say with these houses, you are a custodian, and you get to enjoy their lovely history.”

The formal term for the way the ruins are protected is “a scheduled monument” and such relics of human history are not so rare in the area — Stanstead Hall is not even Phillips’ only current listing that has a moat.

In addition to its primeval outdoor amenities, there is also a gym, multiple barns, the heated swimming pool and pool house — which includes a bar, pizza oven and terrace — 45 acres of gardens and paddocks, a meandering driveway which leads to the house through an “avenue of trees” and plenty of parking space as well as a three-car garage.

The main house is set in the middle of the property, assuring owners’ privacy, and has 13 bedrooms and six bathrooms.

While the architectural artifacts may seem austere, the home is “not too grand, it’s a comfortable country house” enjoyed by the previous families who’ve lived in it, according to Phillips.

Do Not Buy House Warren Buffett Housing Market Crash And Real Estate Crash
How much I made on my first flip house
Best Real Estate Investing Strategies in Georgia by Carson Olinger (Teacher for REI USA)
Inflation and higher rates are a ‘dangerous mix’ for consumers already stretched thin, says chief financial analyst
The RECESSION of 2023 will be worse than they’re telling us | Redacted w Natali and Clayton Morris