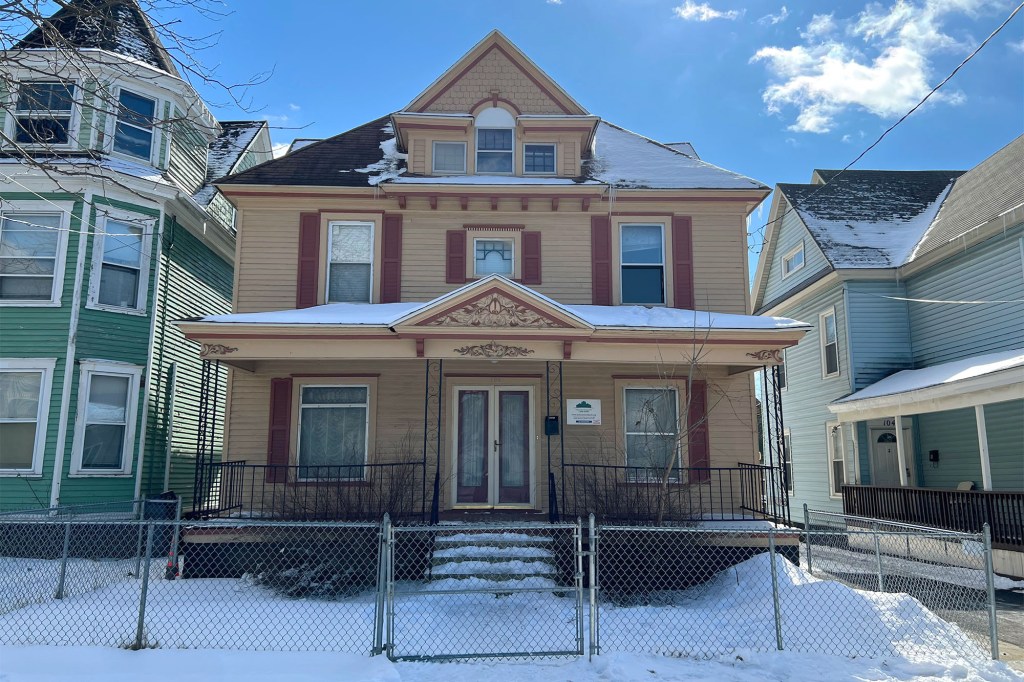 This Syracuse, NY, stunner seems to have it all: stately original woodwork, leaded glass windows and an antique fireplace — all for a jaw-dropping asking price of $12,000.

But do you really have what it takes to buy this Old World, four-bedroom spread?

Located at 106 Elk St., roughly five minutes by car from Syracuse University, the listing for this property says it must be owner-occupied — or renovated and resold to an owner-occupant.

However, flip through the listing photos and you’ll see the home needs some work done — a renovation estimated to cost about $88,000, the listing notes.

The home is for sale through the Greater Syracuse Land Bank, a nonprofit organization that aims to bring abandoned properties back to active use, whose website advertises dozens of fixer-uppers for sale around the Central New York city. Some of them are priced as low as $1,000, and similar to this Elk Street manse, they also require big-time proof of funds. One, at 323 Richmond Ave., requires $105,000 in the bank. Another, at 126 Mckinley Ave., requires a much higher $189,000.

A representative for Greater Syracuse Land Bank did not immediately return a call seeking comment on the Elk Street listing.

The Elk Street home made its way to the popular @syracusehistory Instagram account last week, sharing a video of a walk-through with its nearly 50,000 followers, which earned some 2,400 likes. And while the video opens showing the property’s eye-opening exterior, the inside will require a skilled builder’s touch.

Beyond handsome wooden doorways and a wooden staircase — as well as original door hardware and seemingly original brocade wall coverings behind a layer of paint — the video also shows a state of slight disrepair. Layers of paint peel away from some walls and ceilings, some carpets require replacement, while one carpet has peeled away to show the original thin-strip hardwood flooring — a typical early 20th-century design touch in this neck of upstate New York — that visibly needs to be refinished.

Still, that didn’t stop commenters from sharing their love for the home.

“Wow! Whoever buys this and restores it will have an incredible home! It’s gorgeous even now,” wrote one commenter, while another said, “Man if I still lived in Syracuse I’d buy this in a heartbeat.”

The listing images themselves additionally show a kitchen with outdated appliances and a tile floor in need of replacement, but they also zoom in on envy-inducing details, such as scalloped woodwork and red shutters that dress the façade.

As for other features, the listing says the kitchen has a butler’s pantry. There’s also one full bathroom, a shared driveway and 1,920 square feet of living space across a 5,080-square-foot lot.

In a follow-up post, @syracusehistory shared a photo slideshow of this home, and even revealed details of its past. The account notes a woman named Harvelia E. Hammons owned this house for decades until she passed away in 2018 at the age of 100 — adding she’s the one to be credited for keeping its original features in good shape. She worked for General Electric for 35 years and was a congregant of the nearby People’s AME Zion Church.

“Thank you for highlighting her story,” wrote one commenter. “I wonder why her family if she had any didn’t hold onto the property? That home is a legacy home like so many that you post.”

Do Not Buy A House Or Property Until You Look At The Data Nick Gerli Housing Market
Elon is about to drop a BOMBSHELL on the Hunter Biden laptop story | Redacted with Clayton Morris
Wealthy Real Estate Investors Just Warned US – Get Out While You Can
Zillow’s BOLD Housing Market Forecast for 2023
Hang on, America’s Railway workers want WHAT? Are they crazy? | Redacted with Clayton Morris