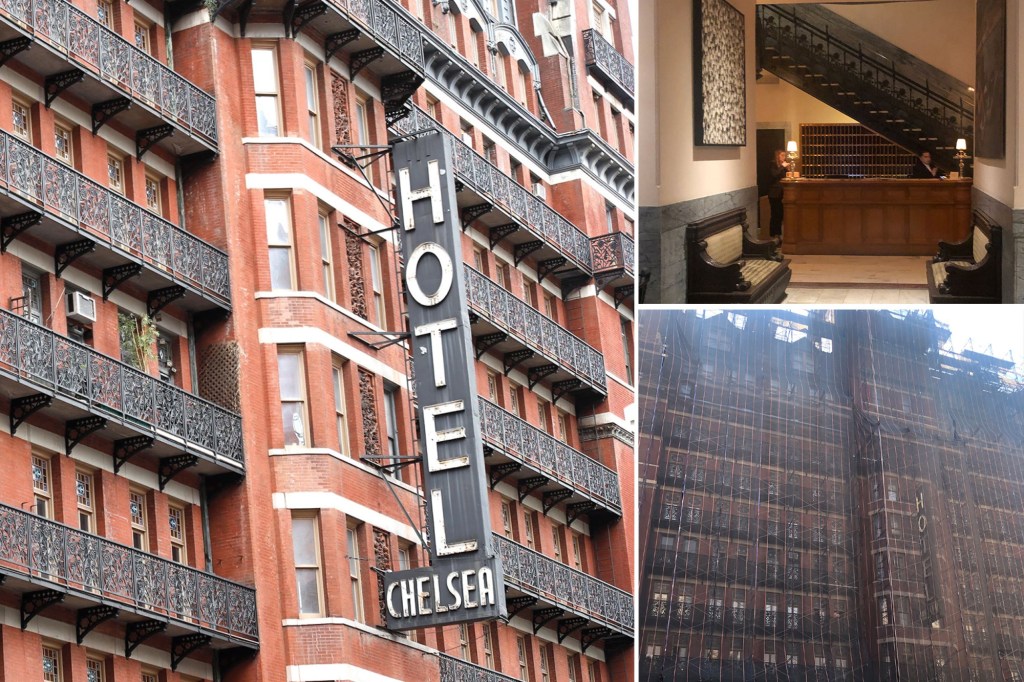 The storied Hotel Chelsea is back after a harrowing, eleven-year hiatus — and it’s for real, this time, after repeated failures to live up to reopening predictions.

After years of widely-reported intrigue and uncertainty, the fabled former haunt of Andy Warhol, Jack Kerouac and scores of New York artists, filmmakers, musicians and all stripes of zany characters quietly checked back in this month.

Behind a mess of black construction nets, the Chelsea is already taking bookings for two floors of guest rooms — which we discovered when we popped into the atmospheric lobby that’s hidden under a sidewalk construction bridge.

The digs are offered at bargain rates for now. The hotel’s Web site says: “As Hotel Chelsea emerges from rehab, we are offering a few rooms at ‘hard hat’ rates to guests willing to tolerate a little construction.” The project is still very much a work-in-progress, its red-brick facade obscured behind netting.

The venue will fully reopen late this summer with 155 restored guest rooms, according to the property’s representatives. They had reached out to us to tout the reopening of romantic Spanish restaurant El Quijote, which was dark for four years.

The eatery quietly reopened a few weeks ago. Now run by Brooklyn-based Sunday Hospitality and partner Charles Seich, it’s smaller than the original, but just as atmospheric with restored Cervantes-themed murals and red leather booths — and much better food than before.

Few other details about the hotel’s full reopening were available. A lobby attendant said, “We’re shooting for September.”

But it’s news enough that the owners, BD Hotels partners Richard Born, Ira Drukier and Sean Macpherson, made good on their six-years-long quest to bring the 12-story landmark back to life as a luxury boutique hotel with condo units.

The new team persevered through a tangle of lawsuits, a dispute with the city’s Department of Housing Preservation and Development and repeated construction delays.

Some of the 50-odd residential tenants who had rent-stabilized leases sued the owners over alleged harassment — resulting in Department of Buildings stop-work orders that further slowed things down.

The funky Chelsea was home over the decades to the likes of Arthur C. Clarke, who wrote “2001: A Space Odyssey” while living there, Mark Twain, poets Dylan Thomas and Allen Ginsberg and jazz musicians Chet Baker and Chick Corea.

Andy Warhol made films at the Chelsea with actress Viva among others of his  “superstars” who called the place home. Madonna, who lived there in the early 1980s, returned to shoot photos for her book “Sex” in 1992.

In perhaps the most notorious episode, Nancy Spungen, girlfriend of Sex Pistols’ frontman Sid Vicious, was stabbed to death there in 1978.

The Chelsea was long managed by Stanley Bard, an eccentric figure whom the New York Times described on his death in 2017 as a “Robin Hood of innkeepers” for his penchant for under-charging residents he liked — if he charged them at all.

Now the Chelsea is at last in stable hands. BD operates two dozen properties in the city including the Maritime, Jane and Bowery hotels.