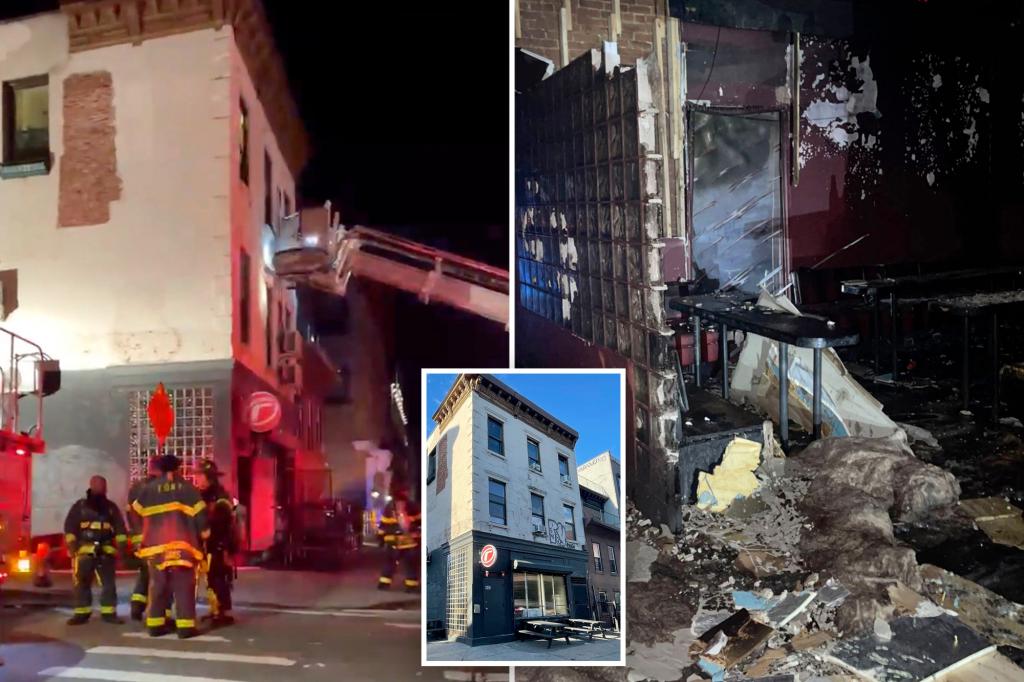 A Brooklyn bar burst into flames Sunday night after an unidentified man allegedly poured gasoline onto its floor, lit a match — and fled the scene.

“I had just stepped out — I was standing right outside the bar, when all of a sudden several people come running and I just saw enormous, enormous flames to the top of the ceiling,” Claire Bendiner, a co-owner of Rash nightclub, told The Post of the moment the fire started at the Bushwick venue. “Everyone was frantic and screaming.”

All patrons and staff managed to evacuate, but a bartender and a DJ were “burnt pretty bad by the flames” and have spent the days since recovering in the hospital, said Bendiner.

A security guard also “went on fire, minorly,” but did not require hospitalization, Bendiner added.

“The fire department showed up fast,” the 32-year-old said. “Seems like it could’ve been a much worse situation.”

The recovering staffers are the “main concern” of Bendiner — who uses they/them pronouns — and their business partner, 26-year-old Jake Sillen, but their 941 Willoughby Ave. space is beyond devastated.

“Very little of it will be salvageable, we’ll have to start fresh,” said Sillen of the club, which had only just opened in October on the ground floor of a three-story, two-apartment building owned by a Kew Gardens-based LLC. “We spent the last year putting all of our time and energy and heart into this place and we were really proud of what it was becoming. It was only just getting on its legs.”

The pair, however, are staunchly committed to reopening Rash.

“We’re going to reopen no matter how long it takes us,” Sillen — who also uses they/them pronouns — said, adding that they’ve received overwhelming support from the community. “Pretty much everyone in the area has been working on a fundraiser for us. It’s been amazing.”

A GoFundMe campaign to help with medical and restoration expenses has raised more than $35,000 at press time.

As for the alleged arsonist, no suspects or motives have yet been identified, and the NYPD confirmed only that the case is “under investigation.”

“We don’t really have a lead — that’s one of the most troubling things about this,” said Sillen, adding that the pair have been working with authorities and are currently “getting updates every hour.”

“We still don’t know what to make of this cruel act of violence,” reads a post on Rash’s Instagram about the arson, in which the alleged suspect is described only by his clothes: a dark hoodie and a backpack.

The Rash fire comes just over two months after another local Bushwick music venue, Bossa Nova Civic Club, was forced to close following a fire. The incident is also eerily similar to the 1990 Happy Land tragedy, the second deadliest fire in New York City history, in which an arsonist torched a Bronx club, killing 87.

“In only five short months we were privileged to become home to such a talented and vital community of artists. It breaks our hearts that anyone would seek to threaten that for any reason,” reads Rash’s GoFundMe, which concludes “We love you, and we will come back from this.”