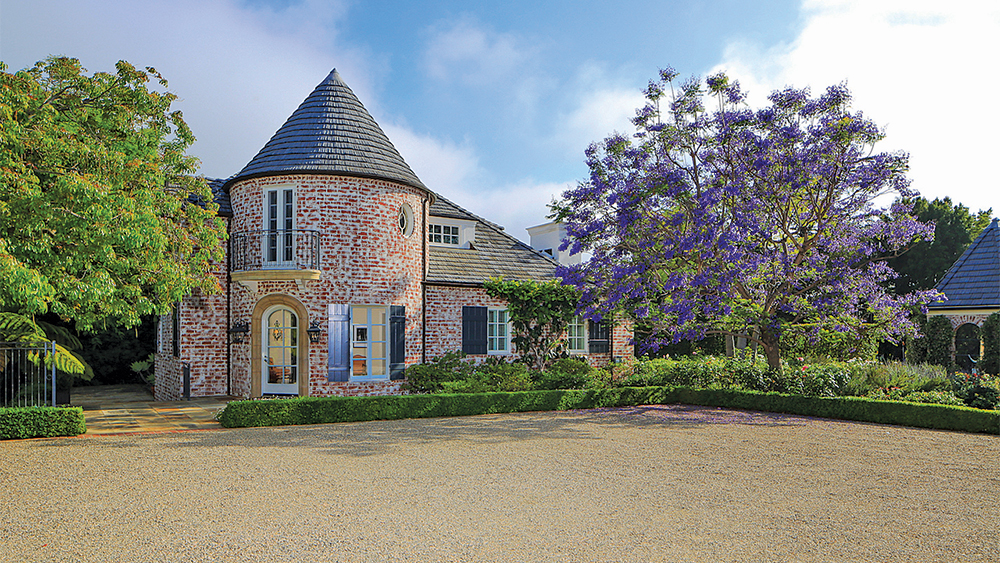 An imposing French manor house on 1.6 park-like acres in the Brentwood area of Los Angeles, owned by veteran entertainment industry executive Frank Biondi Jr., has come to market with a price tag approaching $24 million. Biondi, president and CEO of Viacom in the ’80s and ’90s, and briefly chairman and CEO of Universal Studios in the late 1990s, purchased the handsome, brick-clad Wallace Neff-designed mansion in 1996 for nearly $4.1 million from married super-producers Kathleen Kennedy and Frank Marshall. At about the same time, he shelled out not quite $2 million more for a neighboring parcel from a different seller. The mansion was renovated and expanded in the late 1990s by celebrated architect Robert A.M. Stern to more than 9,300-square-feet with four bedrooms and seven full and two half bathrooms.

Grandly proportioned and sumptuously appointed entertaining spaces include a double-height entry with curved staircase and baronial formal living and dining rooms, both with chateau-style fireplaces. There’s also a family room with fireplace and vaulted, wood-beamed ceiling and a large eat-in kitchen. Along with a trio of en suite guest bedrooms and separate staff quarters, there’s a sprawling master suite with two bathrooms and elaborately fitted walk-in closets.

Meticulously groomed gardens surround a swimming pool and spa, a pool house with gym and a clay tennis court with viewing pavilion. The property is completed by a guardhouse, a gravel-paved motor court that can accommodate two-dozen cars and a 3,000-square-foot guesthouse with a cavernous, state-of-the-art digital screening room.

It would appear that Mr. Biondi, now in his 70s and a director of a number of companies including Yahoo, Hasbro and Cablevision, has decided to simplify and downsize his residential circumstances with the purchase of a 4,500-square-foot condo in a full-service high-rise along L.A.’s Wilshire Boulevard that he and wife Carol quietly scooped up late last year from Democratic political consultant Bob Shrum for $3.25 million.