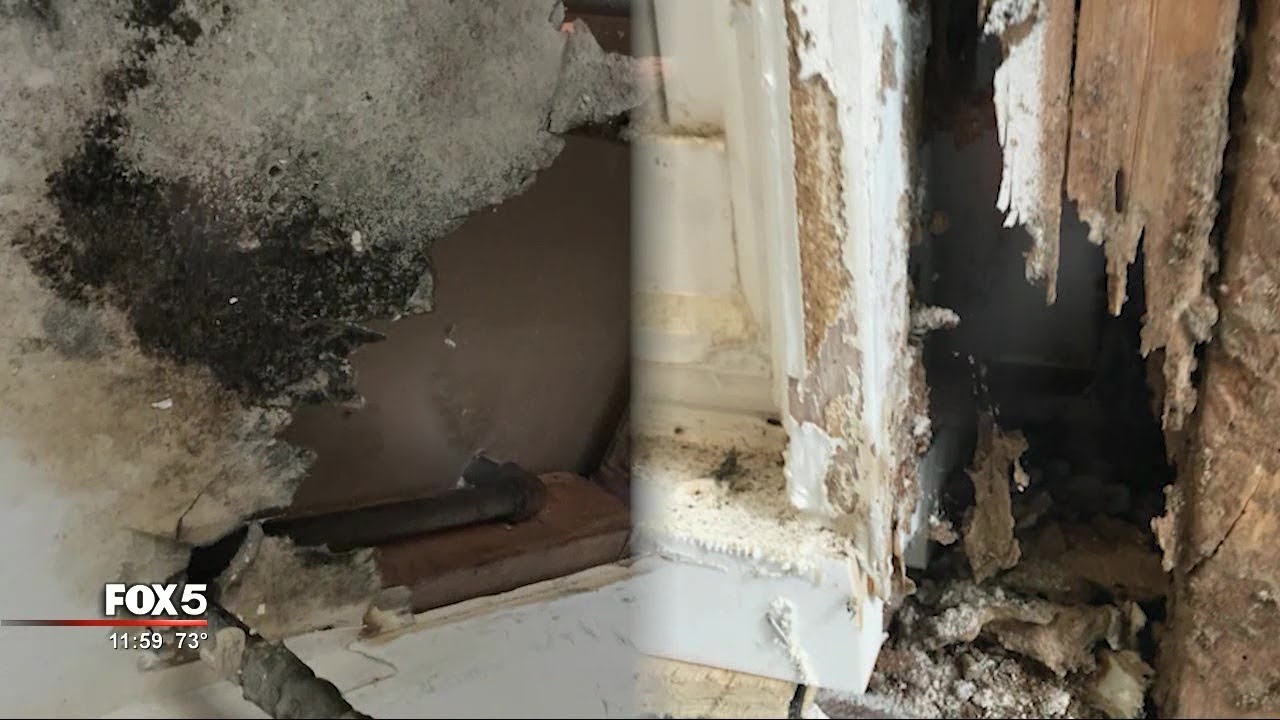 SENOIA, Ga. – The FOX 5 I-Team wants to know how a newly-renovated Fayette County home could have massive amounts of mold and termite damage hidden behind the new drywall.

The new owners paid a home inspector before they closed on the house, but he told the FOX 5 I-Team the only way to find that damage would have been to pull off pieces of the wall.

So how did all this damage get there? And did anyone know before the house was sold to this frustrated family?

Since August, the Hoppaugh family has not been living in the house they bought, but in the driveway of that house. Their home? An RV.

She says it’s not just that her family can’t sleep in the house. They can barely walk through the front door without donning respirator masks. I wore one, too, as she gave me a tour of the home.

Once inside, the smell still worked its way through the mask. A noxious smell, as if someone had left behind a dead body.

“Did it smell this bad when you moved in?” I asked.

In fact, when Shelley and David Hoppaugh closed on the Senoia house in May, it looked attractive. The listing gushed with attractive details:

“this beautiful home has just been renovated.”

Then David decided to replace the kitchen cabinets because they were too dark for Shelley. That decision… would reveal the truth.

“When my husband took it off, it was just hideous,” Shelley recounted. “It was terrible.”

She says they found mold hidden by a piece of plywood stained to match the cabinets. Then…

“During the process of taking the cabinets out, the linoleum ripped.”

So they decided to replace the kitchen floor. More mold underneath. And it smelled…

“Wet,” she explained. “Like someone had died in our house. I mean it was just bad. And it just kept getting stronger and stronger.”

They tore off some of the dry wall. More mold… and then a new shock. Several of the studs had been eaten by termites. Yet whoever renovated the home still put new screws into boards attached to the damage.

The FOX 5 I-Team talked to the head of the company that provides water service to this neighborhood. He confirmed the previous owner had repeated water pipe leaks throughout the house before the bank ultimately foreclosed. That bank sold the property to an Atlanta firm called Jar House, a “boutique real estate brokerage” firm that buys an average of 75 properties each month, fixes them up and resells them.

Their young son is now being treated for a mysterious foot injury. His family believes it was caused by him running barefoot through their house. Tests revealed ten different molds growing inside, including “three toxic forms.”

“It really breaks my heart because we were looking forward to a dream home,” Shelley said fighting back tears. “Maybe it’s not everybody’s dream home, but it’s our dream home.”

We reached out to Jar House owner Zareh Najarian to explain how they sold a house with so much hidden damage. We got a response back from their attorney saying “we are investigating.”

“We’re terribly sorry that the Hoppaughs’ son is suffering,” the statement read. The company pointed out the Hoppaughs bought the house “as is” and “we encourage potential purchasers to hire an inspector to evaluate the condition of the home.”

“Even when you sell a home to someone as is, you’re not allowed to conceal known latent defects,” pointed out Jason Crawford, a Columbus attorney the Hoppaughs hired to handle this. “The inspector didn’t even find this damage. And the only way he would have if you were ripping out walls and ripping at cabinets. And inspectors just don’t do that.”

Crawford sent Jar House a letter asking them to buy back the house. When the deadline passed with no agreement, they sued… accusing Jar House of concealing the damage.

Jar House has not responded yet to the lawsuit or our questions about it.

So for now, one family continues to pay the mortgage on a house that’s not their home, instead living in their driveway, just out of range of the smell.