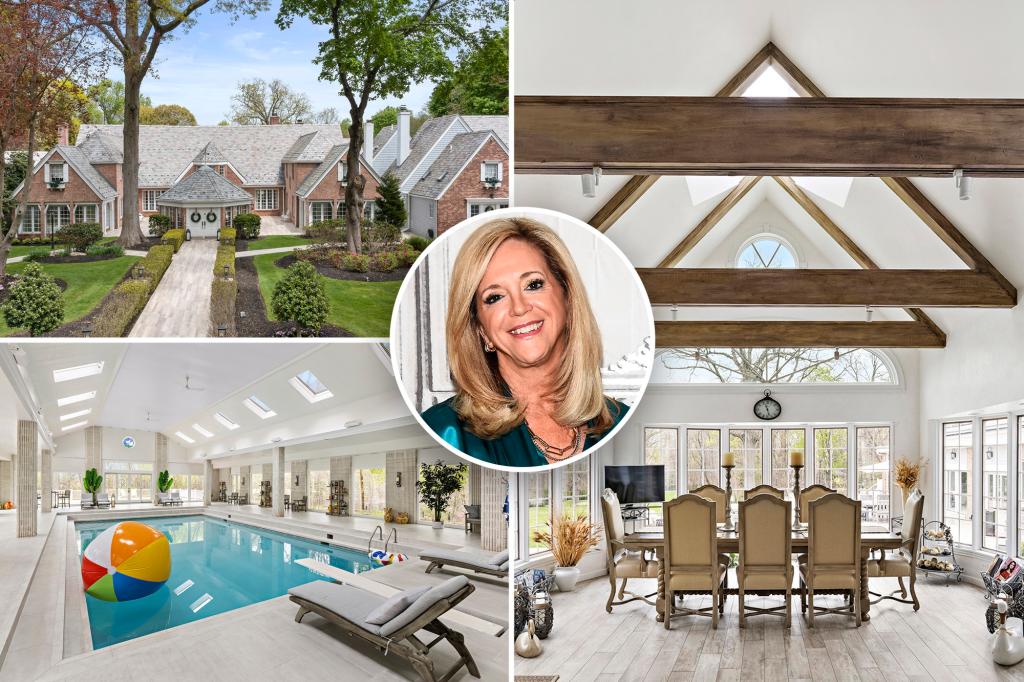 Jennifer Lawrence played her in the 2015 film “Joy,” but now’s your best chance to live like the real Joy Mangano.

Mangano, the 66-year-old inventor who’s best known as the mastermind behind the self-wringing Miracle Mop — and, of course, for inspiring that movie, for which Lawrence received an Oscar nomination and a Golden Globe win — has listed a roughly 22,000-square-foot Long Island estate for $20 million, its listing brokerage told The Post.

The Wall Street Journal broke news of the listing, which stands in the hamlet of St. James on Long Island’s North Shore — roughly halfway between New York City and the Hamptons. Should it sell for that asking price, the estate would set a record in St. James.

The property, named Swan Manor, has three structures and spreads across more than 9 acres with views of the Long Island Sound. Listing images show a stately residence set behind gates — with features including a two-story great room, a two-story kitchen and an indoor pool — that’s visibly been well-maintained during Mangano’s ownership.

“Swan Manor is the most amenity-driven comprehensive compound I have ever seen on the Gold Coast of Long Island,” Shawn Elliott, of Nest Seekers International — who shares the listing with his son and business partner, Zach Elliott — told The Post. “The house is perfect for a large family as it has multiple homes on the property. It would also be great as a corporate retreat with its close proximity to New York City. The feeling when you get in this house is a feeling of love and joy, no pun intended, it’s one of a kind.”

Mangano, who told the Journal she’s sold more than $3 billion worth of products on television thanks to her star status on QVC and the Home Shopping Network, also told the outlet she always dreamed of living in a “big mansion” — and she even spent “millions and millions” of bucks renovating this one, which dates to 1917. She purchased it for $1.35 million in 2000, or about $2.31 million when adjusted for inflation.

“I am a meticulously detailed person,” Mangano told the Journal. “Everything has to be perfect around me.”

It shows. The indoor pool pavilion also sports a hot tub, a large gym and a sauna. Downstairs, the finished basement has a wine cellar and a tasting room. The grounds also have a guesthouse with no fewer than three bedrooms, an additional staff quarters and a four-car garage. The land also has a tennis court, a pergola deck, imported Italian porcelain patios and walkways and a stone garden waterfall, the listing notes. Additional images show a formal dining room with a fireplace, vaulted and wood-beamed ceilings, and even space for a home office. There are also two sunrooms and a massage room.

Her years of owning the home even benefited Mangano professionally. Its many closets prompted iterations of her velvet Huggable Hangers, which keep clothes from falling off, according to the Journal. And that large kitchen inspired a collaboration with chef Todd English for ceramic nonstick cookware.

Listing the estate comes in an effort to downsize. Mangano, CEO of the product line “CleanBoss” and an executive producer of “America’s Big Deal” on the USA Network, hails from Long Island — and was able to spend time with her children and grandchildren at the property in the early days of COVID. She’s not sure where she’ll end up following a sale.

“Prices on Long Island climbed last month, as both sales and prices have been impacted by a continued lack of supply amid strong demand,” he told the Post.