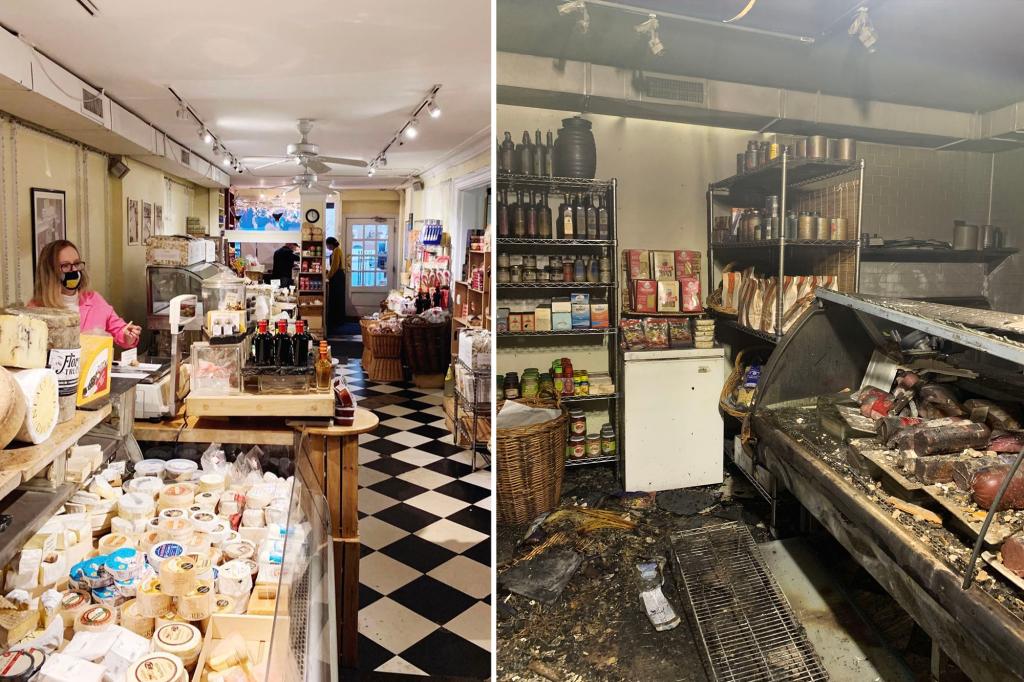 After two decades in the Park Slope neighborhood of Brooklyn, a popular store among locals has been gutted by flames.

While devastated by the damage, the owners of Hiller & Moon — a purveyor of cheeses and fine foods — say they’re overwhelmed by the outpouring of support they’ve received from their community.

“It’s remarkable. People are really coming out of the woodwork to help,” Claire Matern, the gourmet grocer owner’s daughter and a lifelong store employee, told The Post of the deluge of donations, volunteers and human kindness they’ve been met with since their 814 Union St. storefront was destroyed in a morning blaze last Friday, May 20.

“We believe it was an electrical fire,” said Matern, 32, who wasn’t there when the building’s top floor tenants alerted the fire department, whose station is located half a block away. No one was injured in the inferno but the ground-floor shop was totaled by extensive flame and smoke damage.

A message to the city fire department seeking comment, including on what sparked the flames, was not returned by press time.

A GoFundMe for the Park Slope institution, describing it as “the best small fine foods shop in Brooklyn,” has raised some $24,000 of its $50,000 goal. In addition to money, community members also offered other methods of assistance.

“People brought us water and bagels and were coming by all day on Friday and Saturday,” she said. A neighbor who’s a graphic designer offered to make them a sign explaining they had a fire for their now-boarded-up storefront. A nearby wine store sent them a case of wine. “Everyone is like, ‘We’re here to pitch in.’”

“My dad can’t walk down the block, everyone’s offering to help. It took him 45 minutes to get from Union St. to Second and back cause so many people were stopping to hug him,” said Claire of her father, Ted Matern, the shop’s owner.

Despite the damage, there is some bit of good news.

“Everyone is safe. The rest is stuff and is replaceable — but everything has to be replaced,” Claire Matern, who was 12 when the shop opened and grew up helping out behind the counter, wrote in a Facebook post about the incident, telling The Post, “The walls are black. The plate glass window is broken. All the inventory’s been lost.”

Miraculously, though, the shop’s papier-mâché mascot, Gideon the Rooster, survived the flames. “We’ve had a lot of kids ask about him. We say ‘He’s OK, don’t worry,” she said, adding that Gideon was somehow only knocked over and covered in soot.

A 40-year food industry veteran, Ted Matern was inspired to open Hiller & Moon in 2002 after years as general manager of the legendary Soho specialty grocer Dean & DeLuca. “He wanted to bring it to Park Slope, where he’s lived since 1979,” she said.

“I’ve been very heartened by all the support and people stopping me on the street nearly every block to offer their best wishes. It’s amazing,” Ted Matern told The Post.

Among those to volunteer assistance last Friday was Daniel Enriquez, a frequent patron and area resident who’d known Ted for years. Two days later, Enriquez, a 48-year-old Goldman Sachs employee, was shot and killed in an allegedly unprovoked attack while riding the subway to Manhattan for brunch.

“He was a really regular customer,” said Claire Matern. “He lives like two blocks away. He came by to make sure we were all ok and see what he could do.”

While matters of insurance are still being sorted and their most optimistic timeline remains only “as soon as possible,” Claire says that, between their landlord and the community’s support, she feels hopeful Hiller & Moon will reopen, and has reframed the blaze as an opportunity.

“Park Slope is a village of sorts, and I’m feeling really buoyed and reminded that the neighborhood needs us and wants us,” she said. “It’s kind of forcing us to do upgrades that needed to be done after 20 years. I’m excited to come back better.”

HOW NOT TO FLIP HOUSES – WE ARE DONE BUT WE HAVE SOME BAD NEWS
Australia must think we’re all STUPID with this climate move | Redacted w Natali and Clayton Morris
how much we made flipping our house
Mansion with rare view of the Pyramids of Giza has listed for $7.2M
Most Important Step in Flipping Homes