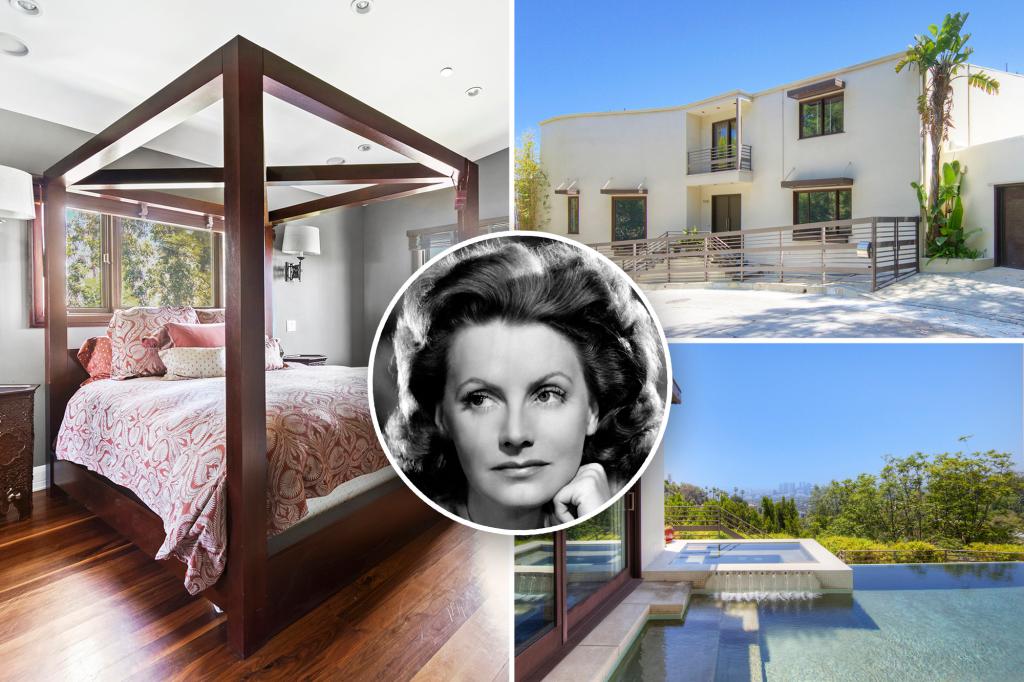 A home of the late, great actress Greta Garbo is now for sale in California.

Set on a 15,080-square-foot lot, the 4,675-square-foot home offers sweeping 180-degree views, with visibility from Los Angeles to the Pacific Ocean.

“The property views are incredible and the location is ideal,” Compass agent Mark Mintz, who holds the listing, told The Post of the “Grand Hotel” star’s ex-abode. “Very private, secluded, in the hills, yet close to the Sunset Strip and Beverly Hills.”

Built in 1937 but extensively renovated in 2006, the compound has little to show in the way of original details, which have been replaced with contemporary clean lines, inset lighting, “rich woods and thoughtful stonework,” as the listing describes.

In all, there are six bedrooms, six bathrooms, three fireplaces and a wine cellar spread across the two stories. Sliding glass walls lead out onto multiple decks, which wrap the building, and the roof also boasts an expansive outdoor area.

Outside, the grounds feature a heated and filtered in-ground infinity pool as well as a hot tub, sprinkler system, barbecue and a two-door garage with an electric vehicle charging station.

The property is the second former house of Garbo’s to hit the market in as many months: In June, an East 52nd Street floor-through co-op the actress once called home was listed for $7.25 million. Unlike the California lodging, that pad still has many of its retro features preserved, as well as a more sentimental reminder of the three-time Oscar nominee, who died in 1990 at age 84.

“The passing boats reminded her of her beloved, native Stockholm,” the listing noted.

As climate change threatens more homes, some properties are getting too costly to insure
Buying The House – Home To Flip – Season 1 – Episode 1
How do investors close fast when buying a house? #denver #colorado #realestate #realestateinvesting
Number of US home listings surge at record rate as market cools
How Do You Actually Buy a House?