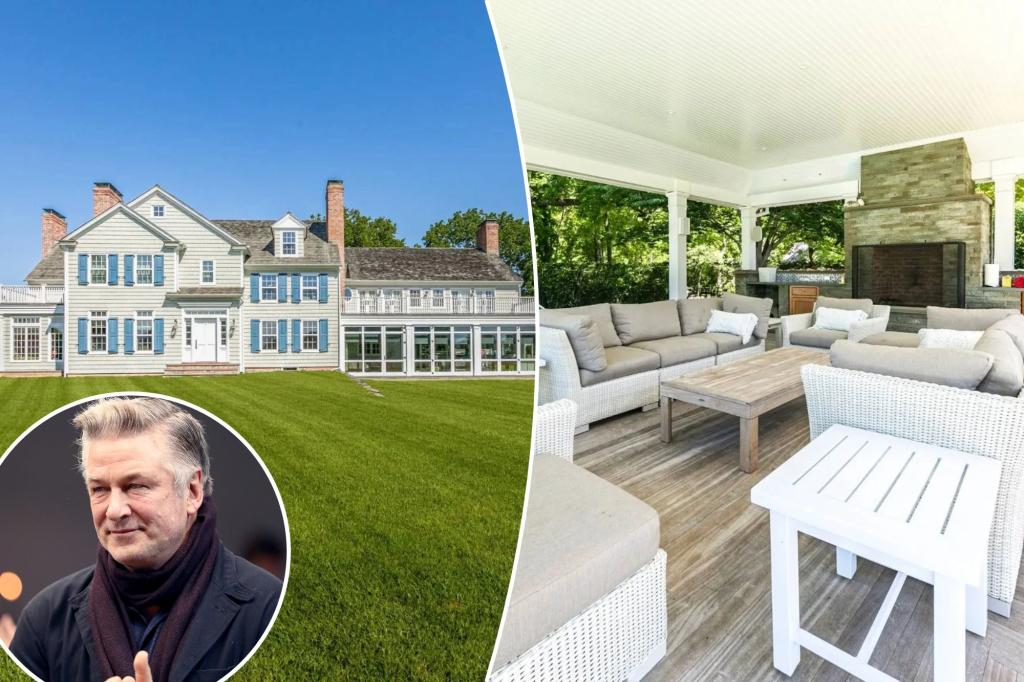 More than eight years after claiming he’d “probably” have to move out of New York, Alec Baldwin finally seems to be moving in that exact direction.

Seven months after buying a massive 55-acre farm in Vermont, Baldwin, 64, is listing his longtime Hamptons estate for $29 million, The Post has learned.

This East End listing also comes less than three months after Baldwin and wife, Hilaria, sold off their upstate Cleveland, NY, lake house in July for $530,000, records obtained by The Post show.

All that remains is their luxe penthouse in Manhattan’s Greenwich village that’s valued at $16 million, which the Baldwins have quietly shopped off-market since the pandemic, The Post reported.

The spirited actor purchased his Hamptons estate in Amagansett in 1996 for $1.75 million, or some $3.35 million today, records show. Baldwin, his wife and their six children have spent most of the COVID-19 pandemic on the property.

Made up of four bedrooms and seven bathrooms, the residence sits on 10 acres of land and boasts more than 10,000 square feet of living space.

Overlooking a bucolic preserve, the listing describes the home as a “marriage of nature and luxury” and an “impeccable retreat.”

The two-story house features all the luxe trappings of Hamptons properties: an expansive eat-in kitchen, a dining room, a movie theater, a wine tasting room and a wood-paneled library.

Tony outdoor highlights include a custom-made 625 square-foot pavilion with a fieldstone fireplace, a 25-by-50-foot pool and spa and a fenced vegetable garden, the listing notes.

“A nature and equestrian enthusiast’s dream getaway offers a unique opportunity to cultivate the reserve or build private stables,” the listing adds. Photos of the interiors, however, are not shown.

Meanwhile, the Baldwins quietly sold off their six-bedroom, six-bathroom home in Central New York, which boasts 340-foot views of Oneida Lake, on June 28.

Baldwin’s aggressive real estate moves come less than a year following the shooting incident on the New Mexico set of the now-suspended film “Rust.” On Oct. 21, 2021, Baldwin discharged a gun being used as a prop, killing cinematographer Halyna Hutchins and injuring director Joel Souza. The incident, which took place at the Bonanza Creek Ranch in Santa Fe, was ruled an accident in August by New Mexico’s Office of Medical Investigator. Meanwhile, the Hutchins family has filed a wrongful death suit against Baldwin.

In a 2014 as-told-to article in New York Magazine, Baldwin openly discussed leaving New York and opting instead for a more private life.

“New Yorkers would make a terse comment to you. ‘Big fan,’ they’d say … They signaled their appreciation of you very politely,” Baldwin said. “To be a New Yorker meant you gave everybody five feet. You gave everybody their privacy. And now we don’t leave each other alone. Now we live in a digital arena, like some Roman [Coliseum], with our thumbs up or thumbs down.”

“There was a time the entire world didn’t have a camera in their pocket,” he added. “There are cameras everywhere, and there are media outlets for them to ‘file their story.’ They take your picture in line for coffee. They’re trying to get a picture of your baby. Everyone’s got a camera. When they’re done, they tweet it. It’s … unnatural.”

‘Full House’ creator’s Manson murder mansion gets $25M price cut
Construction halts at Times Square Theater as building remains tenant-less
These common misconceptions can prevent you from achieving that perfect credit score
Rent prices have dropped the most in these 5 U.S. metros. Why it’s cheaper to rent than buy in many markets
How Kyle Richards’ husband Mauricio Umansky built a $57B real-estate empire