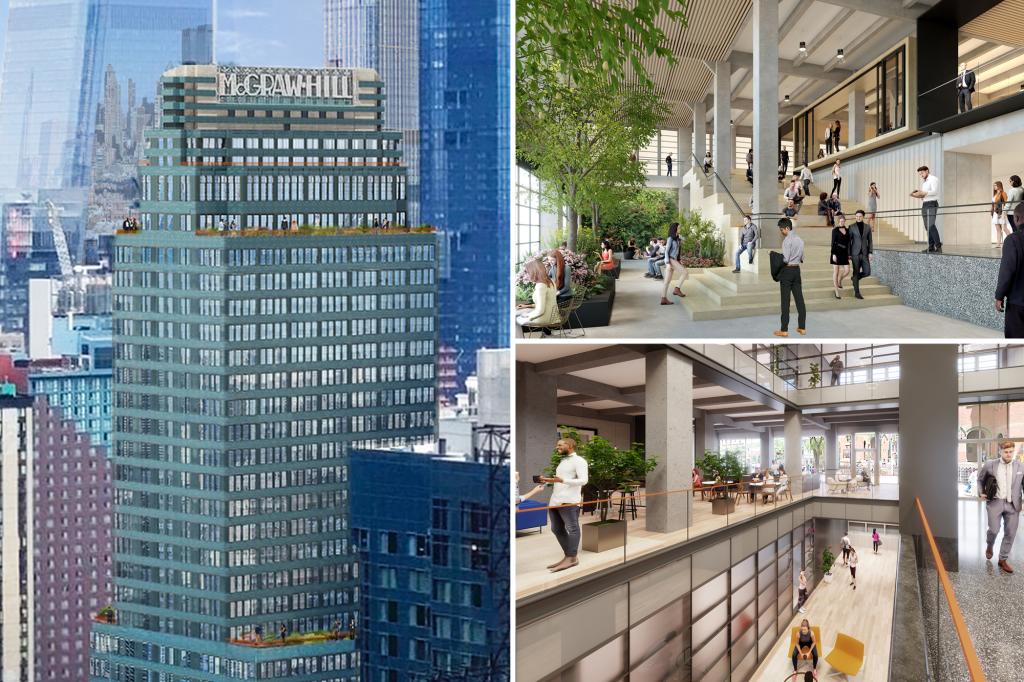 A landmarked blue-green terracotta building near the Port Authority Bus Terminal is exploring the conversion of its upper stories into luxury residential rentals.

The McGraw-Hill Building at 330 W. 42nd St. in Midtown Manhattan is a former printing and loft office tower designed by Raymond Hood in a mixture of Art Deco and international styles that was completed in 1931.

It’s known for “McGraw-Hill” prominently — and stylishly — spelled out in 11-foot-high, white terracotta letters on the top of the 35-story property’s north and south façades.

The building itself is a looker, and is also known by its shifting color scheme that runs upward. Of that eye-catching aesthetic, Hood once wrote, “Dutch blue at the base, with sea green window bands, the blue gradually shading off to a lighter tone the higher the building goes, till it finally blends off into the azure blue of the sky.”

McGraw-Hill later sold the building to Group Health Insurance for its headquarters — and the current ownership bought it in 1979. At one point in the building’s history, Marvel Comics had offices there — and it’s where the late Stan Lee drew Spider-Man and other superheroes.

“It’s perfectly suited to a conversion,” said Gerard Nocera of Resolution Real Estate, the owner’s representative. “It is the first skyscraper built horizontally for light and air. We are looking at the conversion of the 11th through 32nd floor for apartments and above that, two floors of residential amenities.”

Architect Gloria Glass of SLCE Architects is laying out an assortment of large studios and one-bedroom units along with a few two-bedrooms.

“We have the luxury of having slightly larger apartments,” said Nocera.

The goal, he added, is to create a product that fits the new live-work lifestyle and include a work area. “My architects are extremely creative,” he said.

The 33rd and 34th floors, the ones for residential amenities, benefit from 20-foot ceilings.

“You can see the [New Year’s Eve] ball drop to east and the Statute of Liberty to south,” Nocera added of the 485-foot-high tower and its mid-block sweeping views.

The owners explored a residential conversion in the past. But when faced with an entirely empty building during the pandemic, they focused on adding $130 million in dramatic lobby and office amenities, as well as $100 million in mechanical upgrades including elevators and HVAC systems, all designed by architects Dan Shannon and Tricia Ebner of MdeAS.

The lower 300,000 square feet will remain offices, Nocera said — and all those floors also have high ceilings. There are already leases out with asking rents in the $80s and $90s per foot, depending on the location, he said.

What’s more, the city’s Landmarks Preservation Commission also previously approved creating a new entrance on the West 41st Street side of the building along with converting most of the loading docks there to glass storefronts. “We’re re-energizing that street,” Nocera said.

Despite the property’s lengthy commercial history, turning a portion into residential doesn’t seem to be a logistical headache.

“One of the beauties of a conversion is that we don’t have to change any of the infrastructure and the elevator banks line-up,” Nocera added. “The HVAC is also easily converted for the residential upstairs.”