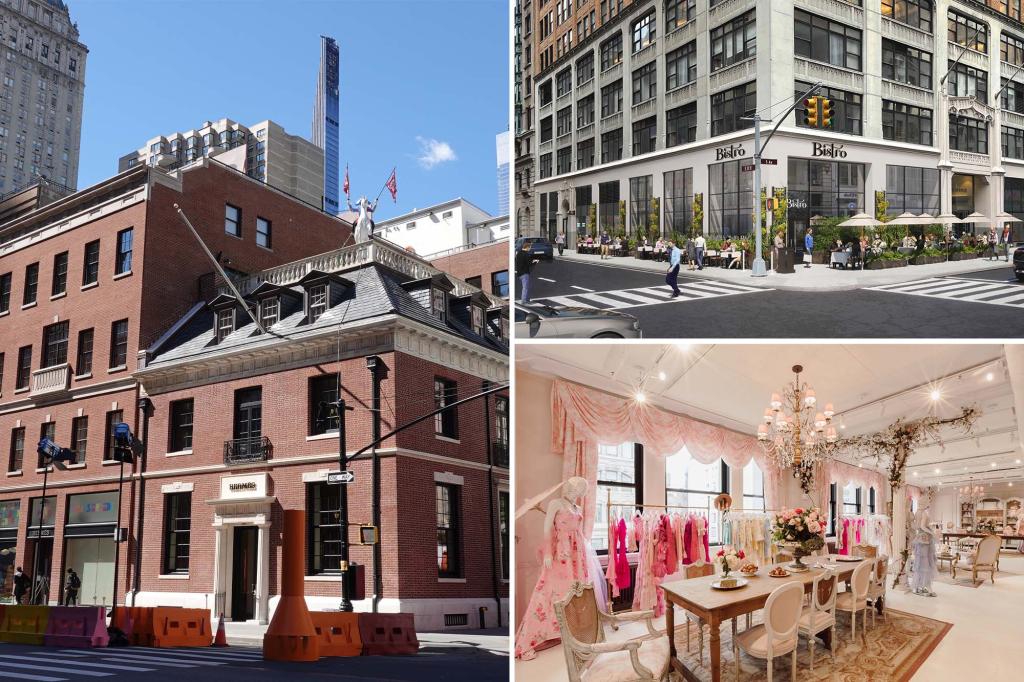 Midtown is booming, brokers say, thanks to the return of office workers and tourists.

“We are totally back,” declared Steven Soutendijk, an executive managing director at Cushman & Wakefield.

The retailers around the Midtown office corridors “live and die with the office density, and we see a notable difference,” said David LaPierre, vice chairman of CBRE.

Now, there appears to be no shortage of old and new concepts.

“It’s like the city and the retailers have awakened,” said Jared Epstein, president and principal of Aurora Capital Associates. “We’ve had action on pretty much everything from Soho to the Meatpacking District, the West Village, Midtown and Brooklyn. There is apparel, food, fitness, health care and interest on every level with spaces filling up quickly.”

At Madison Avenue on the Upper East Side, two clients repped by Current Real Estate Advisors’ Brandon Charnas opened on the same block.

The first, Something Navy, owned by Charnas’ wife, Arielle, is in 1055 Madison on the northeast corner of East 80th St. next door to Reformation, which sells reinvented vintage.

There’s just one 2,000 square-foot vacancy left in that building and then his other client Bandier, is open at the adjacent 1061 Madison. LoveShackFancy has an outpost across the street.

Meanwhile, Valentino signed on for 26,300 square feet at 654 Madison, which once held Calvin Klein. Nearby, Hermès just completed its new store at 706 Madison and opened it with a block party at the end of September.

“Luxury as a category is on fire and that consumer isn’t affected at all by what is going on the market,” said Richard Hodos who recently joined JLL as vice chairman, Retail Brokerage, after 15 years with CBRE. “Those who have a penchant for buying expensive handbags and shoes will keep buying.”

That’s one reason luxury retailers are sniffing around Fifth Avenue again. “I expect Fifth Avenue to have a busy 2023,” Soutendijk said. Victoria’s Secret and its Pink store have reopened at 640 Fifth Ave. bringing life back to that block. Mango is open at 711 Fifth Ave. in the former Ralph Lauren space and Swarovski is hard at work transforming the interior of the Gap at 680 Fifth Ave., but will miss this holiday season. Aritzia signed on for 33,000 square feet on three levels at 608 Fifth in a former Topshop spot.

Louis Vuitton is celebrating its namesake founder’s 200 birthday by leasing the former Barney’s at 660 Madison Ave. for a year-end museum-like experience and display of 200 trunks decorated by global “names.”

But at 767 Fifth Ave., where the Apple cube store is a neighbor, Under Armour’s 25,000 square feet is still up for sublease. The asking rent is $17 million a year.

In Soho, 427 Broadway is turning into the House of Cannabis, aka THCNYC. A|X Armani Exchange just subleased 536 Broadway, while Glossier will open at 72 Spring St. and Athletic Propulsion Labs, aka APL, leased 8,000 square feet at Aurora’s 75 Prince St.

Downtown, there’s a lot of activity with Life Time fitness center now open in Macklowe’s One Wall St. where both Whole Foods and the first city Printemps will open in 54,000 square feet.

But “Flatiron is probably the most active submarket,” said Soutendijk, executive managing director.

Instagram sleeping fav Avocado Mattress is now open at 135 Fifth Ave. at 20th Street in the Flatiron District, while clothing retailer Psycho Bunny has leased a warren at the former Aveda at 140 Fifth Ave. on the southwest corner of 19th Street, as well as a store in Hudson Yards through CBRE. Bag brand Herschel Supply Co. signed at 138 Fifth.

Newmark brokers are marketing the current Nike store at 156 Fifth Ave. where the lease expires in May. Meanwhile, industry sources say Nike has been exploring other area openings, including the ground floor of the Flatiron Building, which is being entirely revamped and, for now, has a T-Mobile shop occupying its glass “prow.”

The Meatpacking District is also getting an influx of deals including a Sisley-Paris Spa at 652 Hudson at the corner of Gansevoort Street.

In mid-2023, Leica will open a flagship gallery at 406 W. 13th St. to showcase both cameras and images with VIP events on their terrace.

“It’s great to see a company doing something like that in the Meatpacking, let alone a side street,” said Epstein of Aurora Capital Associates, which represented the ownership.

Another photo-related non-profit bought its retail space. Adelaide Polsinelli, vice chairman of Compass, represented a retail condo at 380 Columbus Ave., at West 78th Street, that was sold to Aperture, a photographic educational provider for $8.9 million.

“You cannot really have a good brand without having these social medial influencers come into the store and post,” said Peter Braus, managing principal of Lee & Associates NYC.

“They do it in stores in Soho or the Meatpacking or the Lower East Side.”