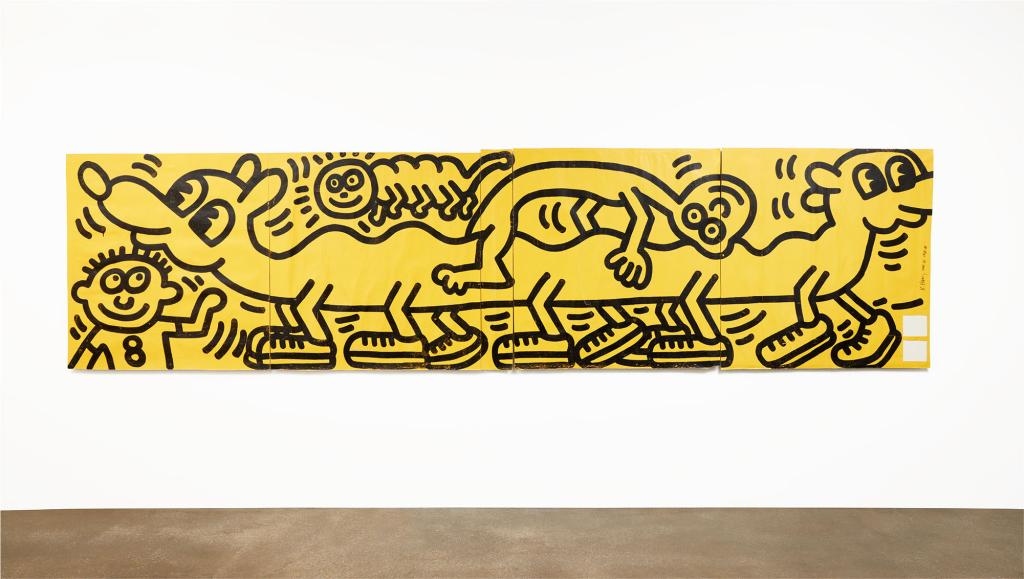 A newly rediscovered work — one left in a forgotten storage space for more than 30 years — by a long-famed artist is soon going under the hammer.

Sotheby’s is set to auction off a five-panel Keith Haring piece on Nov. 17. Proceeds from the sale, estimated to command a bid in the $500,000 to $700,000 range, will benefit New York’s Mount Sinai Hospital. Ahead of the auction, the bright yellow piece will be on public view for the first time in decades at Sotheby’s York Avenue gallery until Nov. 16.

Haring created the acrylic-on-vinyl wallpaper piece for the pediatric wing of Mount Sinai Kravis Children’s Hospital in 1986, four years before he died of AIDS-related complications at the age of 31. Mount Sinai’s only art therapist at the time had invited him to do a few drawings for the sick children in the facility, a deed Haring found so fulfilling that he asked to paint a mural on the wallpaper of the the children wing’s second floor.

“Patients filled into the hallway to watch in awe as Haring’s full-body painting process — akin to a dance or performance — was on full display,” reads the mural’s auction page, quoting Haring as once saying, “There is nothing that makes me happier than making a child smile.”

Just three years later, that building was demolished — Mount Sinai’s current main campus, the Guggenheim Pavilion, built in its place. His mural, though, was carefully removed and put into storage. It has remained there ever since, out of sight and out of mind.

The work, known officially as “Mural for The Mount Sinai Hospital, New York” was “long thought to be lost forever,” noted a press release, but was recently unearthed, and in very good condition.

Meanwhile, in Brooklyn, Haring’s art was never removed from the walls of Woodhull Hospital, which remain adorned with his iconic creatures. The artist gifted the medical facility with his paintings, which today still wrap its lobby and line its hallways, the same year he painted the piece now up for auction.

Madison Avenue tower reopens with leafy oasis under glass canopy
How To Fix & Flip Houses WITHOUT Using A Dime Of Your Own Money!
Why You Should Buy Reits
It’s Over: The Housing Market Just Collapsed
How To Find The BEST Real Estate INVESTMENT Deals | E3